Evo Morales says disqualification of candidacy is a blow to democracy 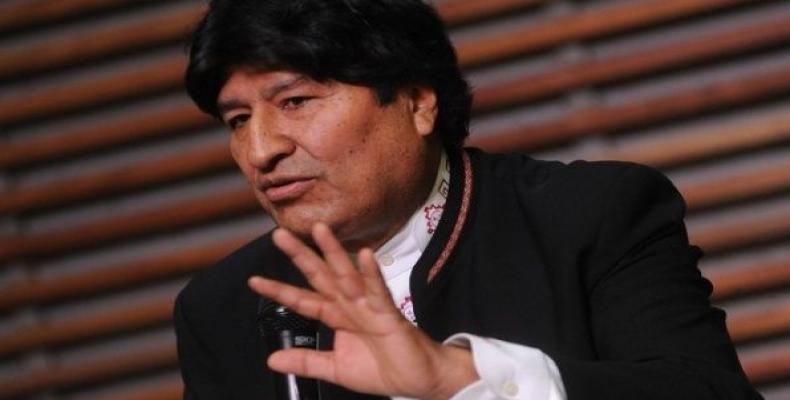 Buenos Aires, February 21 (RHC)-- At a press conference held in Buenos Aires on Friday, Bolivia's former President Evo Morales rejected the decision of his country's Supreme Electoral Court (TSE) to disqualify him and his former Foreign Minister Diego Pary for the upcoming May elections.

"Unfortunately, the TSE does not allow free, healthy, and transparent elections. That is what it seems," the leader of the Movement Towards Socialism (MAS) said.  Evo Morales also asked the Bolivian coup regime not to destroy the political, economic, and social institutions built during the last decade.  "You can do whatever you want with me, but don't destroy democracy,' the Socialist leader said.

The TSE president Salvador Romero Thursday announced the disqualification of Morales' candidacy for a seat in the Senate, for he had not "sufficiently" proved his permanent residence in Bolivia.

This disqualification was a foreseeable event in a country where the self-proclaimed President Jeanine Añez is complying with Washington's agenda.  Therefore, Morales directly accused the United States.  “We meet all the requirements.  Instructed by the U.S. embassy, they did not approve the legality,” he said and warned that “the people are mobilized and organized.  We will continue to fight for our sovereignty and dignity.”

At the press conference, attorney Raul Salvador also highlighted the arbitrary and illegal nature of the Bolivian Electoral Court's decision.  "These decisions violate Bolivia's Electoral Law.  They are irrational interpretations," he stressed.

Although Diego Pary's candidacy was also rejected, the Bolivian TSE did not disqualify Luis Arce, a Socialist politician who will compete as MAS presidential candidate in the May 3rd elections.  According to a survey released earlier this month, Arce is the favorite to win the elections as he has 31.6 percent of the voter intentions.  ​​​​​​​His closest rival, Carlos Mesa, would receive 17.1 of the votes.

Only 16.5 percent of the Bolivians would vote for Jeanine Añez, who said that she would not be a candidate when she seized power through a U.S.-backed coup d'etat in November last year... but has since announced she would run in the elections.