Fauci says one can't run away from the numbers of U.S. COVID deaths 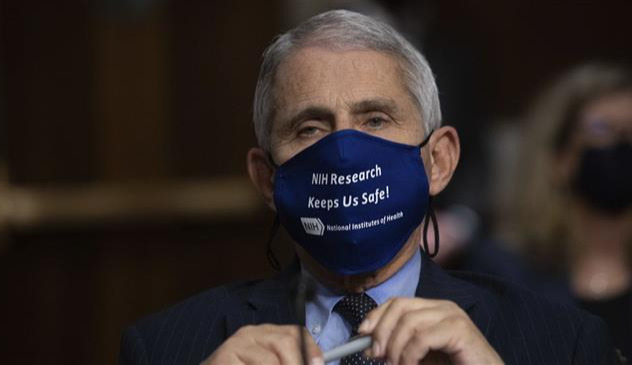 Anthony Fauci, the director of the National Institute for Allergy and Infectious Diseases (NIAID)

Washington, January 4 (RHC)-- The top infectious disease expert in the United States, Dr. Anthony Fauci, has expressed frustration with the skyrocketing rise in coronavirus-related fatalities across the country as outgoing President Donald Trump questions the authenticity of the official death toll.

Fauci, the director of the National Institute for Allergy and Infectious Diseases (NIAID), said on Sunday that he had not anticipated the COVID-19 pandemic death toll in the United States would reach the current levels, lamenting that indoor activity and holiday travel have facilitated the virus transmission.

"To have 300,000 cases in a given day, and between two and 3,000 deaths a day is just terrible," he told ABC News, calling on Americans to take the necessary public safety precautions to slow the ongoing surge.

“There's no running away from the numbers… It's something that we absolutely got to grasp and get our arms around and turn that inflection down by very intensive adherence to the public health measures, uniformly, throughout the country, with no exception," the prominent health expert underlined.

Fauci made the comments shortly after President Trump misleadingly claimed in a tweet that the numbers from the Centers for Disease Control and Prevention (CDC) of infected persons and deaths in the country were  "exaggerated."

"The deaths are real deaths," Fauci said in response to the president's tweet.  "All you need to do is go out into the trenches.  Go to the hospitals and see what the health care workers are dealing with.  They are under very stressful situations in many areas of the country.  The hospital beds are stretched, people are running out of beds, running out of trained personnel who are exhausted."

"That's real," he continued.  "That's not fake.  That's real."  Fauci had warned earlier that the worst of the pandemic was likely yet to come, after major holiday gatherings.

The increase in the death toll comes as U.S. officials race to vaccinate millions of Americans, but vaccination campaigns have gotten off to a slow and messy start.  As of Sunday, over 14 million vaccine doses have been distributed across the US but only 4.2 million people have received shots, according to the CDC, prompting criticism of the government's rollout plan from both Democrats and Republicans.