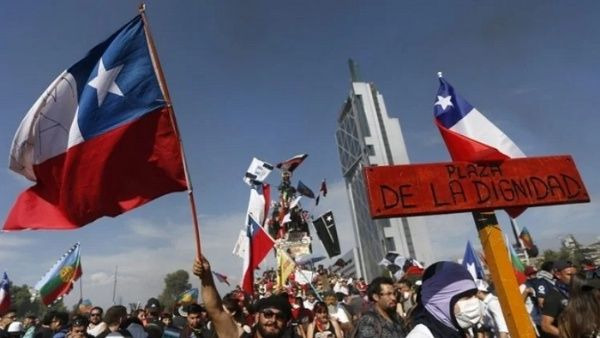 Santiago de Chile, October 18 (RHC)-- Movements and organizations mobilize this Monday in various parts of Chile, in acts of protest that recall the two years of the social outbreak of October and November 2019 in that South American nation.

According to local media, about 50 demonstrations are expected throughout the country with the participation of workers, students, members of collectives and community organizations.

Calls for a national strike on October 18 and 19 have been spread through social networks.  It is expected that at 17:00 local time on Monday there will be a massive march in the direction of the Palacio de la Moneda, seat of the Executive.

From 06:00 local time the first barricades were placed in communes of Santiago, the capital.
Shortly after, public acts of the Ukamau movement of settlers and members of the Coordinating Assembly of High School Students (ACES), gathered in Estación Central and Providencia, respectively, were reported in that city.

On their banners, Ukamau supporters claimed the right to housing, health, education and work, while students stressed the protagonism of the people and the importance of fighting in the streets as the only way to transform the country.

Local media point out the symbolism that during this day the Constituent Convention will start the drafting of the new Magna Carta, a process that emerged from the resistance in the streets during October and November 2019.

The media also reported that the Carabineros Corps announced that it will deploy more than 5,000 troops to try to contain the demonstrators.  The armed institution pointed out that among the most covered places will be known "risk zones" such as Plaza Italia (Baquedano), Villa Francia, Lo Hermida, Conchalí and Recoleta.