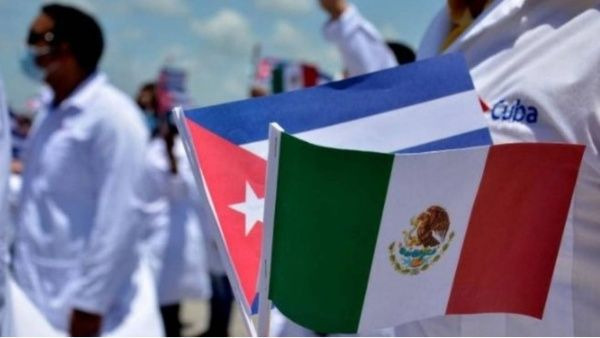 The agreement between Cuba and Mexico was reached during the Mexican president's visit to Havana last May 7 and 8. | Photo: Embassy of Cuba in Mexico

Mexico City, May 25 (RHC)--The president of Mexico, Andrés Manuel López Obrador, affirmed this Tuesday that "it is a vileness that for political, ideological, conservatism, for a retrograde way of thinking, they disqualify" 500 Cuban doctors who have been contracted from Havana.

The Mexican president said that although the debate on the hiring of Cuban doctors is good, first nationals will be hired.  He also announced that beginning today until June 3rd the call for the recruitment of 13,765 medical specialists required in the country will be open.

In relation to what he called the controversy over the hiring of the 500 Cuban doctors, AMLO assured that some Mexican doctors "do not want to work in La Montaña de Guerrero, besides the fact that others know New York better than Chiapas."

According to the Mexican president: "The neoliberal model left the country without doctors," in view of which "one of the things I am proposing is that an appeal be made to young specialists.  There are many people with a social dimension.  There are many people, many professionals with that vision.  But there are others because this whole neoliberal period was very alienating.  There are others who think that their world is that of the sphere in which they developed and that it does not exist."

Mexican President Andrés Manuel López Obrador said: "This is how it was proposed.  We are going to fill positions with Mexican doctors as far as we can.  As we know that we are not going to have, unfortunately, all the specialists we require, especially in the Mountains of Guerrero because we already know.  We know the towns of Mexico (...).  But also with all due respect, a city dweller does not have a vision.  He may know more about New York or Madrid than Chihuahua or Tlaxcala or Chiapas.  That is not a reproach; it's just the situation."

And AMLO added: "Cuban doctors have already been helping with COVID.  We are very grateful to them and the truth is that it is vile that for political or ideological reasons, for conservatism, for a retrograde way of thinking, they are disqualified.  Besides, the right to health is a human right."

The agreement between Cuba and Mexico was reached during the Mexican president's visit to Havana last May 7th and 8th.