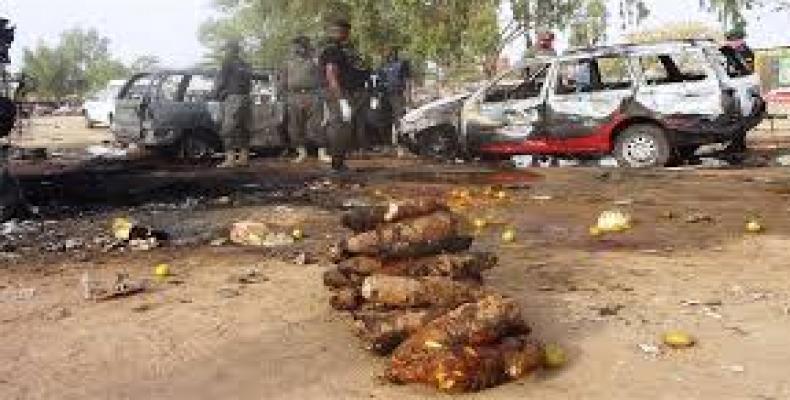 Abuja, October 15 (RHC)-- Three bombings, suspected to be carried out by Boko Haram Takfiri militants, have killed at least seven people in northeast Nigeria. Nigerian Army spokesman, Colonel Sani Usman, said on Wednesday that the attacks were in the densely-populated suburb of Ajilari-Cross late Tuesday. The blasts occurred within seconds of each other.

Other sources, however, said dozens were killed and injured. The blasts targeted people who were leaving their homes to enjoy the evening breeze following scorching daytime temperatures. Witnesses said gunfire followed the three explosions with authorities blaming Boko Haram for the attacks. A similar attack last month at a mosque in Ajilari-Cross killed 54 people and wounded 90 more.

Nigeria has intensified its crackdown on Boko Haram as the terrorist group continues to wreak havoc across the country through bombings, raids and kidnappings.

In a Wednesday meeting with commander of the U.S. Africa Command, General David Rodriguez, Nigerian President Muhammadu Buhari called for the “final routing of Boko Haram as an organized fighting force” by the end of the year.

Nigerian troops launched a raid on militants on Tuesday reportedly in revenge for last week's attack on a military camp in northeastern Geidam town. Reports said 10 militants were killed in the operation.