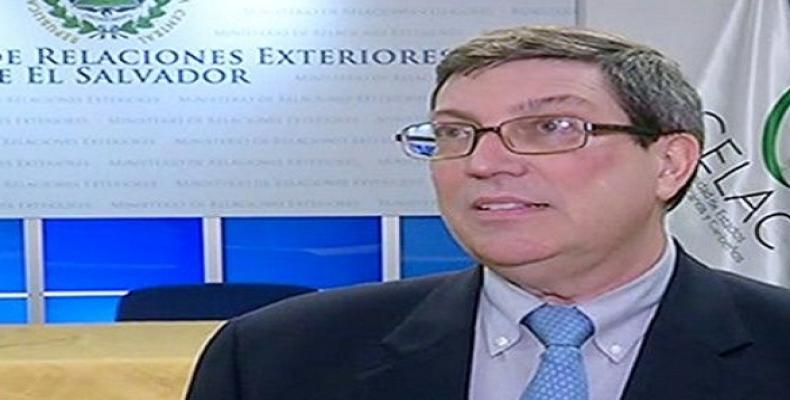 San Salvador, May 3 (RHC)-- Cuban Foreign Minister Bruno Rodríguez has called on member countries of the Community of Latin American and Caribbean States (CELAC) to uphold the proclamation of the region as a zone of peace.

The CELAC meeting in El Salvador was at the request of Venezuela to debate the latest attacks against the South American nation by the United States and the Organization of American States (OAS), particularly OAS chief Luis Almagro.

Minister Rodríguez recalled the longstanding complicity of the OAS in coups, social violence, forced disappearances, extra-judicial executions, the murder of journalists and social activists in the hemisphere, not to mention the brutal effect of neo-liberal policies imposed by pro-U.S. governments on regional peoples.

Referring to the violent role of right-wing opposition factions in Venezuela, Minister Rodríguez recalled their involvement in the coup against Hugo Chávez in 2002, the attack on the Cuban Embassy in Caracas, endangering the lives of women and children residing therein, and the brutal assaults on Bolivarian ministers.

He also emphasized that the 2002 coup attempt was supported by the United States and the OAS, as well as some European politicians.

The Cuban foreign minister commended the repeated calls for dialogue with the opposition by President Nicolás Maduro, which  have been supported by Pope Francis. He warned though that such efforts will be futile if those gathered at the meeting are not able to condemn the acts of violence and attacks on Venezuela's constitutional order.