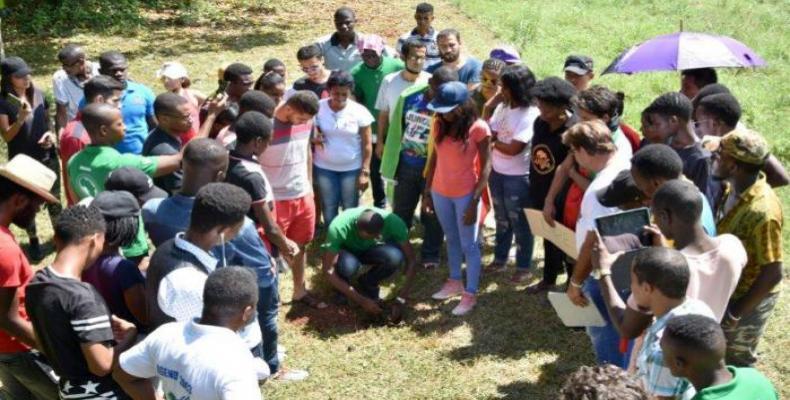 Camito, August 24 (RHC-Granma)-- Hundreds of international students from some 30 countries, who are pursuing university degrees in Cuba, were part of the 9th International Student Solidarity Brigade, based at the Julio Antonio Mella International Camp, in the municipality of Caimito, Artemisa province.

Organized by the Cuban Institute of Friendship with the Peoples (ICAP), the program included meetings with leaders of youth organizations; volunteer agricultural work; and conferences on the construction of socialism on the island, international affairs, the damages caused by the criminal economic, commercial and financial blockade imposed by the United States and new developments in relations between the two countries.

The brigadistas came mainly from the Latin American School of Medicine (ELAM), the Agrarian University of Mayabeque, the University of Havana, and several higher education centers located in the western provinces, and were grouped by regions: Latin America-Caribbean; Asia-Oceania; Africa and the Middle East.

Speaking to Granma International, Abakar Hissein, a fourth year student at the Salvador Allende Faculty of Havana's University of Medical Sciences, noted that while all international students want to participate in this initiative, a selection of approximately 200 students is made, as the camp has limited capacity.

“We all like to come,” the young man from Chad noted, “We make friends of other nationalities, we socialize and learn from the culture of different parts of the world. We talk about our social problems and the struggles we face to achieve national sovereignty and peace.”

Álvaro Dinis Kidiwa, from Angola, expressed a similar view, explaining that the main motive is to interact with others, highlighting solidarity. “Here we share personal experiences about the traditions and history of each community,” the fifth year medical student at Havana’s Calixto Garcia Faculty noted.

Dinis Kidiwa has participated in the brigade on previous occasions, and is aware that it was created at the request of students themselves, to allow those not returning home for vacations to increase their knowledge about the Cuban reality and interact with fellow international students.

“These brigades have taught me that the world needs young people of a new type, who imagine a transformed world in which political balance is possible. Likewise, we come to this place as a way of thanking Cuba. We see her as the mother who has given us all the education necessary for life,” he added.

He went on to stress that in this space, students can express themselves freely and come together to condemn imperialist actions that seek to colonize the world. They also denounce the territorial occupation of the Western Sahara and Palestine. He firmly asserted: “We will continue fighting and we will not tire.”

Abdalame Mohamed, a Sahrawi refugee and graduate of the University of Medical Sciences in the province of Sancti Spíritus, explained that he comes to the camp to denounce the atrocities committed by Moroccan colonialists against his compatriots, and express his hopes for a better world.

“The main attraction of this place is solidarity,” he said, adding that the brigade offers an opportunity to express concerns and ideas on how to build a different society, learn the latest regarding the injustices committed around the world, and explain to others the meaning of emancipatory struggles for national sovereignty.

“We oppose the interventionist speech of U.S. President Donald Trump on June 16, where he revealed his backward position on relations with Cuba. This action is aimed at separating two geographically close peoples with a desire to interact. The successive White House administrations should consider respect to favor the bilateral exchange,” he added.

Abdalame has lived in Cuba for more than ten years. He undertook his pre-university and university studies here, and is now studying the specialty of Comprehensive General Medicine, and works in a family doctor’s office. He stated that he sees Cubans as his own family, and confessed to being unable to explain the meaning of the word Cuba to him.

“I admire the socialist system for the justice and social equity that it instills. I would like something similar for my country, that would guarantee quality of life. I graduate in October and will return to the refugee camp in Dajla, in the province of Tindouf, where I came from. There is a hospital there and I hope to transmit everything learned in Cuba,” he expressed.

Meanwhile, Bashar Raja, from Palestine, recognized that the Cuban Revolution is an example and paradigm to follow. “The thought of José Martí and Fidel Castro inspires us to fight for a different world. The Cuban experience has provided a modern concept of a political system, based on respect for the full dignity of human beings. We have learned that the unity of organizations and parties must become the protective shield of the state.”

The young Palestinian joined the Cuban Federation of University Students (FEU) and holds the position of organizer within the FEU secretariat of Havana’s Comandante Manuel “Piti” Fajardo Faculty of Medicine, where he is studying.

He noted that in political activities and commemorations of historical dates, Palestinian youth detail the sufferings experienced by their families, caused by the Israeli occupation. “We seek moments to exhibit photos and audiovisuals, to organize cultural evenings and acts. We show the reality of our cause and demand the world respect our sovereign rights as a people,” Bashar Raja explained.

He also noted the aspirations for national independence, to lay the foundations for peace in Palestine.  Bashar Raja added that learning in Cuba offers more than a profession, as the education system is based on a deep-rooted national sentiment.  The young Palestinian concluded: “Here you are happy.”