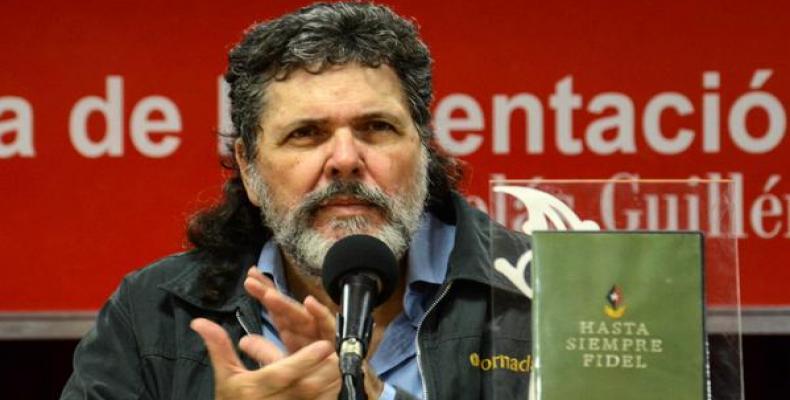 Havana, February 6 (RHC)-- Tributes offered by the Cuban people and friends around the world to Fidel after his death are collected in a new book entitled “Hasta Siempre Fidel,” presented yesterday by the Council of State Office, during the 27th International Book Fair.

There is a pain felt deep in the hearts of all Cubans. A pain that spreads.  An unbearable sadness.  There are situations that bring it to the fore, which despite being natural are disconcerting.  But this is a reality that unites an entire people in a common lament.  And there is now a book that captures all this suffering, minute by minute, hour by hour, beginning at 10:29pm, November 25, 2016, and continuing over the next nine days, as all of Cuba bid farewell to our Comandante.

According to the daily Granma newspaper, "Hasta Siempre Fidel" is a volume about Fidel's death and life, light and shadows, pain and patriotism.  Tributes offered by the Cuban people and friends around the world to Fidel after his death are collected in the new work, presented Monday by the Council of State Office, during the 27th International Book Fair underway at Havana’s San Carlos de la Cabaña Fortress.

“In this book, we relive all those hours, beginning with Raúl’s message to the immense tribute by Santiago’s people in Santa Ifigenia (Cemetery), commented Minister of Culture Abel Prieto, who was responsible for the book’s introduction.  The images in its pages, he added, play a leading role, describing the collection as tremendously moving.

Published in the book’s 447 pages are poems by 20 Cuban authors such as Pablo Armando Fernández, Virgilio López Lemus, Nancy Morejón, Ángel Augier, and those from around the world like Juan Gelman, Pablo Neruda, and Mario Benedetti, as well as excerpts from comments by Presidents, ministers, and authorities from different parts of the world. The book is distinguished by the quality of its somber design and the use of the latest graphic arts techniques.

"This book is the work of many. It is a homage meant to perpetuate the tribute which the people offered the historic leader of the Revolution. Toward this end, recognized professionals were involved, including Dr. Rosa Miriam Elizalde, responsible for the selection and notes; Ernesto Niebla, design; and Juan José Valdés, who carefully led the editing and production," explained Alberto Alvariño, second in charge at the Ideological Department.

Speaking at the book launch in the Fortress' Nicolás Guillén Hall, he added that work on the collection began November 28, 2016, and both the initial outline and the mock-up were completed in record time.

Printed in a four-color process, with a polished finish, the volume has a cover with relief, made possible with a technique that produces the perception of three dimensions, along with the combined use of a shiny and matte ultraviolet coating.

The edition comes accompanied by a digital support produced by the University of Computer Sciences.  The multimedia offers two menus: the principal one in the form of a timeline, and a complementary one that presents videos and materials published in the press, invaluable testimonies to the essence of sentiments expressed by the people.