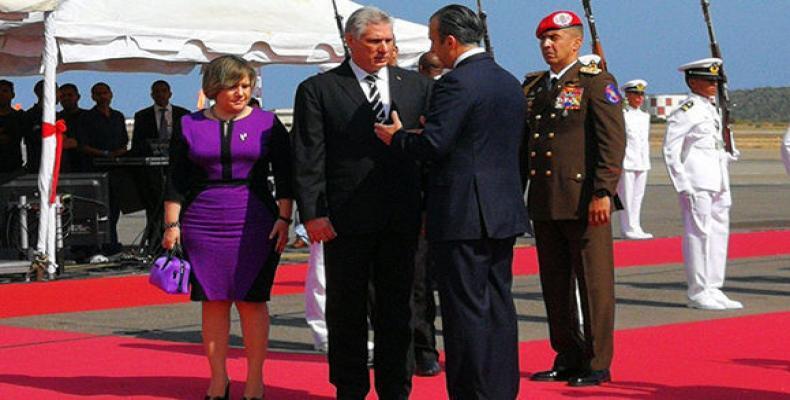 Caracas, May 30 (RHC)-- Cuban President Miguel Díaz-Canel arrived Wednesday morning in Caracas to pay an official visit to the Bolivarian Republic of Venezuela.

This is the Cuban president´s first foreign trip, after he was elected Head of State and Government during the constituent session of the National Assembly of People's Power, on April 19th.

"We bring a message of fraternity and solidarity ... for the people and Bolivarian government of Venezuela, for President Nicolas Maduro," Diaz-Canel said on arrival, congratulating Maduro for his resounding success during the presidential elections held on May 20th.

Right after his arrival, the Cuban leader headed to Venezuela’s National Pantheon to lay a floral wreath to liberator Simon Bolivar. After the solemn moment, the Cuban leader greeted medical doctors who were waiting outside in representation of some 30,000 Cubans who work in different collaboration projects in the South American nation.

During the remainder of the day, Diaz Canel will meet his Venezuelan counterpart, Nicolas Maduro, will pay tribute to late leader of the Bolivarian Revolution, Hugo Chavez Frias and will visit facilities associated to Cuba´s cooperation projects in the Venezuelan capital.