CTC leader denounces US blockade at TUC Congress in the UK 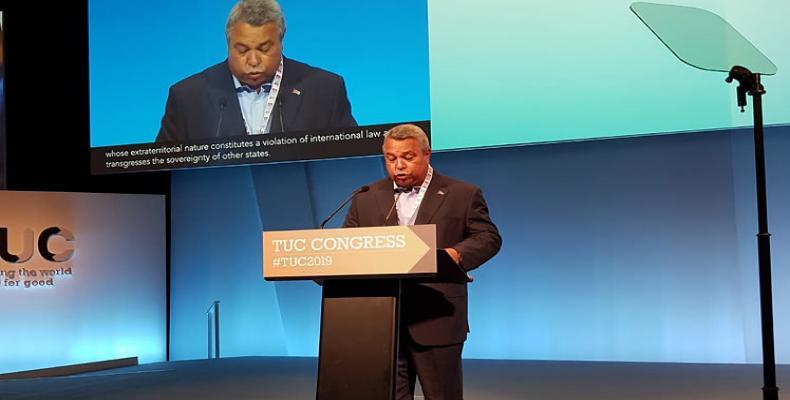 "The blockade provokes hardships to my people, it does not allow them to acquire basic supplies, medicines and raw materials from US companies, with a heavy impact on  industries. It is the main obstacle to our development programs, limiting access to sources of financing and foreign investment", the trade union leader said.

Guilarte noted that the recent prohibition of cruise ships from making port calls in Cuba has had a severe impact on the self-employed workers in the activities of cafeterias and restaurants,  hostels and houses, and for those who provide taxi services.

The CTC leader thanked the "contribution of the TUC, the British unions and the Campaign of Solidarity with Cuba", and ratified "the political will of the CTC to continue expanding and strengthening the relations of exchange, cooperation and solidarity between the two trade union centers and their respective unions.

The international trade union movement, concluded Guilarte, will always be able to count on Cuba's sincere voice and denunciation in the face of injustice, inequality, and for the establishment of a world in which the human being, his dignity, and the well-being of the workers are placed at the center.

The TUC was founded in 1868, and it brings together more than 5.6 million working people who make up our 48 member unions in the United Kingdom. The 151st annual TUC Congress 2019 at The Brighton Centre, 8 - 11 September.