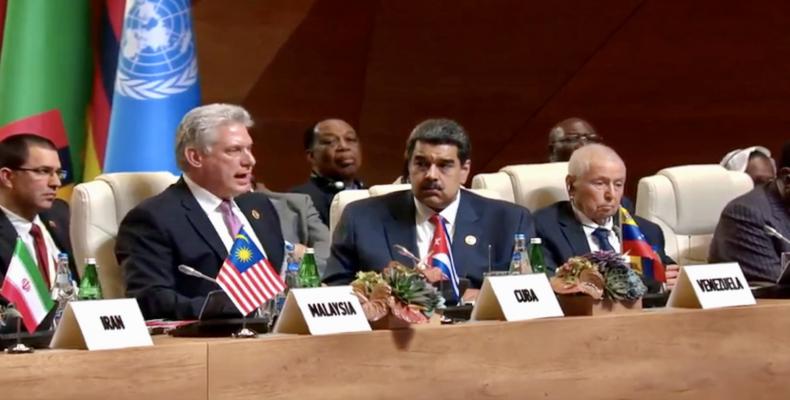 Baku, October 25 (RHC)— Cuban President Miguel Diaz-Canel says that the Third World War started on no specific date and will continue for many years, bleeding dry the noble pacific countries of the world with weapons from imperial armies, mercenary soldiers and terrorists disguised as liberators, in the name of the war on terror, the defense of democracy, freedom, or human rights.

The Cuban head of State made those remarks at the opening session of the 18th Non-Aligned (NAM) Summit underway until Saturday in Baku, Azerbaijan.

“ Never were we lied to more than now because this is all for the interest of a minority. In the 21st century, we see threats, aggressions all over, especially on sovereign states that do not want to bend to the will of the great powers of the world, and this is why Venezuela is a hero,” he said.

Sitting next to the outgoing chairman of the Non-Aligned Movement, Venezuelan President Nicolas Maduro, Diaz-Canel recalled that during decades, the South American nation´s infinite energetic reserves were plundered until the Bolivarian revolution rose to power to put them at the benefit of its people and regional and international cooperation.

“This is why there are so many perverse accusations against Venezuela, new techniques of psychological warfare, trying to destabilize and cause and internal conflict. In its cynical maneuvers, the Empire accuses the Bolivarian government of being an instrument of Cuba and accusing our collaborators of being disguised as military forces. Now the U.S. persecutes us and blocks our bilateral trade, disrupting our economies,” he said.

The Cuban head of state strongly rejected the US-waged campaigns against leftist political forces, leaders, and progressive governments in Latin America and the Caribbean and voiced the island's firm support to Venezuela´s Constitutional President.

Diaz-Canel also congratulated the people of Bolivia for its active participation in the electoral process and President Evo Morales on his re-election. He also denounced the attempt of coup détat and the slander, destabilization, and violence campaign unleashed by opposition sectors instigated by the United States in the South American nation.

In his address to NAM Summit, Diaz-Canel said that nations of the South, with their sweat and suffering, have paid the price for progress and development, after being submitted to colonial plundering.

He added that they have all the right to ask why military spendings are going up, while investments in development and cooperation are going down, or why the seriousness of climate change is being underestimated, while the existence of small island states is at risk  and there is a clear threat to the very survival of humanity. 32sda

The Cuban president recalled that Cuba was the only Latin American founding member of the Non-Aligned Movement, a group of free countries guided by democratic rules, and an organization without a veto,  a scenario wanted for a future United Nations.

The Cuban leader expressed solidarity to all people that fight for the right self-determination and rejected the unilateral decisions by the United States in support of Israel against Iran, making the Middle East more unstable. He also made a call for the end of the war against Syria and to find a full, fair and sustainable settlement of the Israeli-Palestinian conflict.

In concluding his remarks, the Cuban president ratified that the island´s commitment to the principles of Non-Alignment.