Raul, Diaz-Canel and Maduro participate in the closing ceremony of Solidarity Encounter 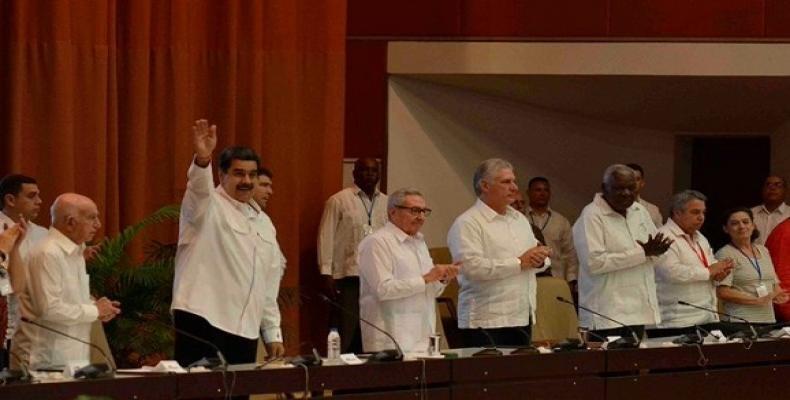 With chants of "Chavez and Fidel live on," and "Cuba Si Bloqueo No," the ceremony began, which was also attended by Esteban Lazo Hernández, president of the National Assembly and the Council of State, and Jose Ramon Machado Ventura, second secretary of the PCC.

The first words of the event were from members of the Network in Defense of Humanity, including former Brazilian President Luiz Inácio Lula da Silva:

"The Cuban Revolution is living proof that the period in which ideas play a fundamental role in history has not ended," they said.

The event had the participation of more than 1,300 delegates from 95 countries and was organized by the Cuban Chapter of Social Movements and the Cuban Institute of Friendship with Peoples (ICAP).

"From this solidary Cuba, recognizing the heroic resistance of its people, 1,332 people from 789 organizations of the social and popular movement of solidarity, networks, platforms, parties and intellectuals from 86 countries have exchanged ideas.

"Committed to all just causes, we are living a new moment in history.  The people at the ballot boxes, in the streets, and social networks demonstrate with their votes and their protests the exhaustion of the imperial offensive of the oligarchic right, which with the hand of U.S. imperialism, excludes broad sectors of the population and endangers the human species.

"The people are demonstrating that it is possible to defeat the imperial offensive.  Times of hope are opening up.  Unity is vital and a duty.  Mobilization is a cry for order. Mobilization is an imminent task,” she said.