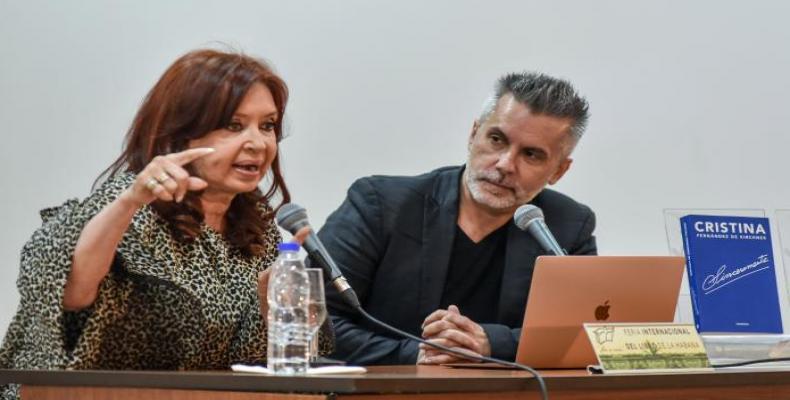 Havana, February 9 (RHC) – Argentine Vice-President, Cristina Fernández de Kirchner, presented her book Sincéramente (Sincerely) for the first time outside Argentina at the Cuba 2020 Book Fair on Saturday. It is no coincidence that Havana is the site chosen by the Argentine leader, because the work begins on March 12, 2019 talking about Cuba.

The afternoon in the Nicolás Guillén room at La Cabaña Fortress, where Cuban President, Miguel Díaz-Canel Bermúdez, attended at the rhythm of “Pa’ lo que sea  Cristina, pa' lo que sea” and “Viva Perón, viva Perón ”, chanted by the Cuban and Argentine assistants who could not hide their enthusiasm. And it is that 'the presentations of this book are like a concert of the Rolling Stones; that is why, I say Cristina Cristina is singing in Havana today,' said her friend and journalist, Marcelo Figueras, who described the volume as the political and editorial phenomenon of the last four years in Argentina.

‘It is honestly not an autobiography,’ says Fernández de Kirchner. ‘The first chapter, which was the last one, I finished writing here in Havana. Here I wrote about the letter from San Martin and tell what the persecution was (...) The persecution of the leftist leaders in Argentina has a mafia component, which translated into the persecution of my children, especially Florencia. It was simple, to see what my life was like, I visited it a lot, I was a single mother and they saw there a point to affect me.’ When talking about her daughter, Cristina could not help thanking the government and the Cuban medical professionals. ‘The fame is very well earned. Florencia is much better today and I have to thank them for that.’ The Vice President spoke of Argentina's debt during the military dictatorship and at present. ‘The model from 2003 to 2015 was very different, an industrialization model. After 2015, a new period of indebtedness returned to Argentina.’

The book is an honest claim of justice, equality and sovereignty in Latin America. This is the voice of Argentina, but at the same time that of all the peoples that fight for a less invasive and contaminated future, from which the Vice President summons us. ‘We have to think ignoring dark circles, without artifacts, without prejudices, because the things as they are now are not well’, concluded Cristina in Havana.