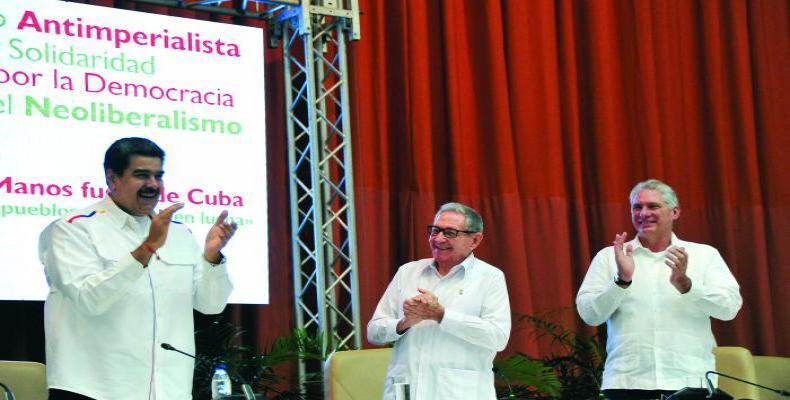 Havana, August 20 (RHC)-- Venezuela's gratitude for Cuba's assistance in the face of the scourge of the COVID-19 pandemic was expressed in the exchange of fraternal messages on Twitter by Presidents Nicolás Maduro Moros and Miguel Díaz-Canel Bermúdez.

"On behalf of the Venezuelan people, I am infinitely grateful to the Cuban medical team, to Brother President Miguel Díaz-Canel Bermúdez and to the heroic Cuban people for so much solidarity and support.  We are more united than ever in brotherhood, thanks to our commanders Fidel and Chávez.  An embrace," tweeted the South American president, shortly before the committed response from the social network itself: "Brother President Maduro, you can always count on Cuba's support and solidarity.  Venezuela and Cuba are sister nations," replied the Cuban president.

On the morning of the same day, a gesture generated a greeting in Caracas: the medical brigade of the Henry Reeve Contingent, which for five months provided solidarity services in the face of the pandemic emergency, was decorated with the Order of Francisco de Miranda, by presidential decision.

At the official ceremony of the award, Executive Vice President Delcy Rodriguez recalled that "when the pandemic was just arriving in our country, the first friendly hand offered to Venezuela was that of the people of Cuba, which you so worthily represent."

She exalted the humanist conception of this cooperation, because "Cuba has sent doctors to the most dangerous places, where COVID-19 has had exponential growth, overflowing.  There are Cuban doctors on the front line," he stressed.

"I have not seen anything more dignified than the Cuban medical mission deployed around the planet, and here in Venezuela they do it with great courage, a lot of courage," she said.

Delcy Rodríguez said that "while the U.S. empire and the extremist sector of the Venezuelan right are sending mercenaries to kill the people of Venezuela, to destroy the peace and stability of our homeland, you came with your beautiful hands to save lives in this terrible fight."