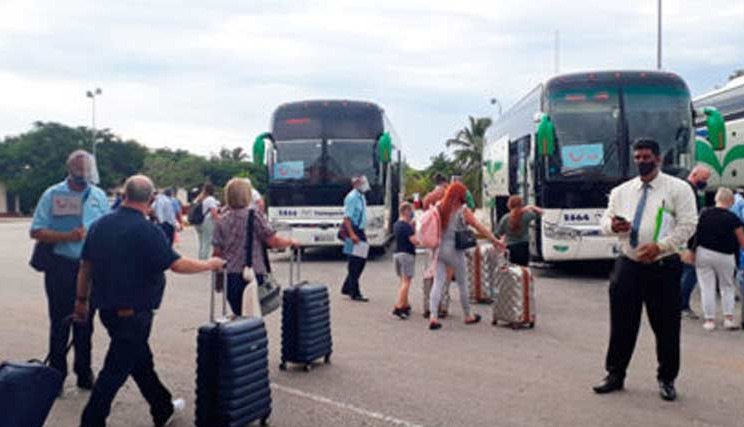 Varadero, October 26 (RHC)--A group of 241 tourists from the United Kingdom were the first to arrive on Sunday at the famous beach resort of Varadero, which is now open to foreign markets under one maxim: Cuba is a hygienic and safe destination.

That group, first after seven months of inactivity here with foreign vacationers on the Covid-19, booked rooms at the Royalton and Iberostar Varadero hotels, both of the Cubanacán chain, and at the Vista Axul Beach, of the Gaviota group.

The vacationers arrived at the  Juan Gualberto Gómez Airport, in the western province of Matanzas, moved by the TUI UK (Germany-UK) agency, on a Boeing 787-8 Dreamliner aircraft from the British city of Manchester.

The British market in Varadero had an inflection in the last two years. It is recovering now; next November 5, another TUI flight from London will be joining, which would increase the flights to two weekly frequencies 680 seats, which is essential', he highlighted.

The director of the Center of Hygiene, Epidemiology, and Microbiology (Cphem) of Matanzas, Fernando Acebo, for his part, explained to Prensa Latina that the presence of a medical team in all the hotels guarantees the safety of clients and employees.

This team will accompany the tourists during their stay and have among its responsibilities to carry out frequent health check-ups. Upon arrival at the airport, the travelers will undergo a PCR and then be followed up at the facilities'.

The head of the Center highlighted that this medical attention in the lodgings themselves, 'Cuba is the only country in the world that offers it to its visitors', commented that the hygienic-sanitary protocols are a joint result between the ministries of Health and Tourism.