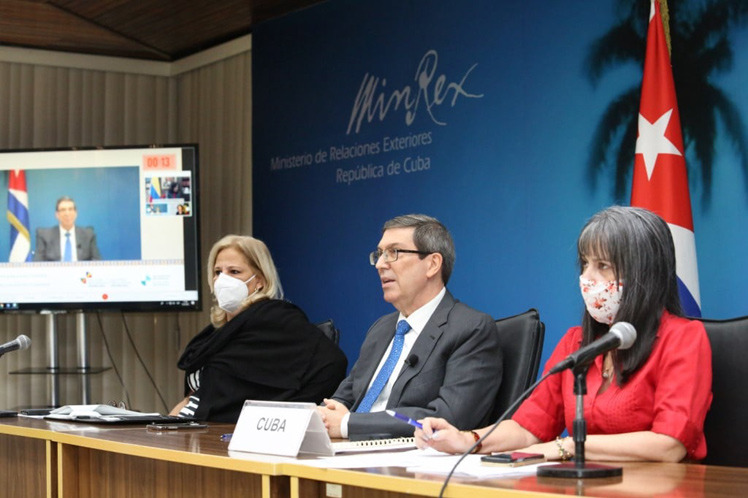 Havana, April 15 (RHC)-- Cuba's Foreign Minister Bruno Rodriguez reaffirmed Thursday the island's willingness to contribute to facing Covid-19 and that it remains equally committed to the purposes and objectives of the Ibero-American Summit, to be held on April 21.

During the virtual link at the II Meeting of Ministers of Foreign Affairs of the Ibero-American Conference, Rodriguez denounced the impact of the United States' hostile policy, which he described as illegal, immoral, extraterritorial, and a massive, flagrant, and systematic violation of human rights.

'Its opportunistic resurgence in conditions of a Covid-19 pandemic subjects Cuban families to shortages, deprivation, and suffering, which makes it even more evident that it is an act of genocide according to the Geneva Convention of 1948', he added.

The blockade, he acknowledged, is the greatest impediment for the Cuban people to exercise their right to development.

The head of Cuban diplomacy assured that the obstacles to innovation and development of Ibero-American nations are perpetuated due to an unjust and anti-democratic international order, further exacerbated by the pandemic.

In this regard, he recalled that the Caribbean nation sent 57 medical brigades to contribute to 40 countries and territories in the fight against Covid-19.

With equal determination, we will continue our humanitarian cooperation', he added.

The savage and exclusionary neoliberalism in the approach to the production and acquisition of vaccines must cease,' he added.