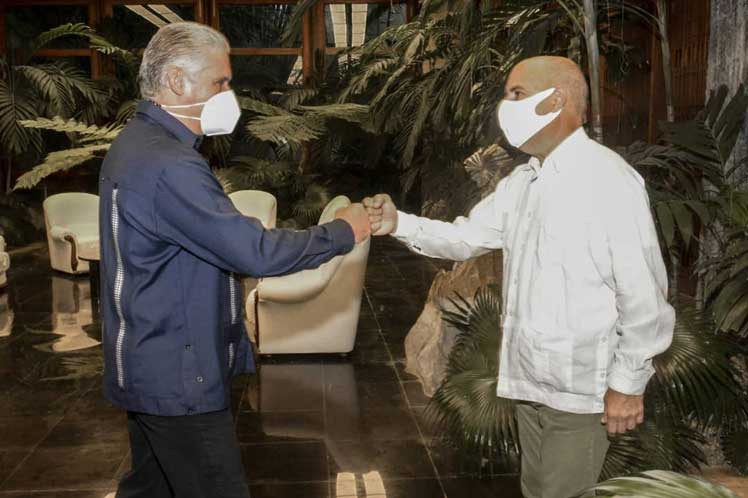 Havana, Aug 25 (RHC)--Cuban President Miguel Díaz-Canel held a meeting on Wednesday with Carlos Lazo, the Bridges of Love project leader, which promotes solidarity with the Caribbean island from the United States.

The President described the exchange on his Twitter account as fruitful and stressed that the Caribbean nation would continue to strengthen relations with its nationals abroad as part of an invariable and unstoppable process.

In another message, Díaz-Canel thanked the donations of medical supplies and the support of those living abroad and friends in solidarity with the people in the face of the impact of Covid-19 and the tightening of the U.S. economic, commercial and financial blockade.

At the head of the Bridges of Love project, Carlos Lazo arrived last July at the White House. He delivered to the U.S. government a petition backed by more than 27,000 signatures, urging President Joseph Biden to lift the siege on Cuba.

In addition to the request to lift the measures against the Caribbean nation, the activist spoke with the Deputy Assistant Secretary for Western Hemisphere Affairs of the State Department, Emily Mendrala.

The struggle to eliminate the restrictions that weigh on the normal development of family relations on both sides of the Florida Straits and against the blockade constitutes the fundamental axis of the project headed by Lazo, who is also determined to bring the Cuban reality to the American people.

Meanwhile, the Cuban community in the United States and other countries, together with solidarity associations and friendly organizations, have been leading actions in recent months to send syringes and other medical supplies to Cuba in response to the pandemic and the vaccination campaign.