Miguel Díaz-Canel calls for a definitive leap in food production 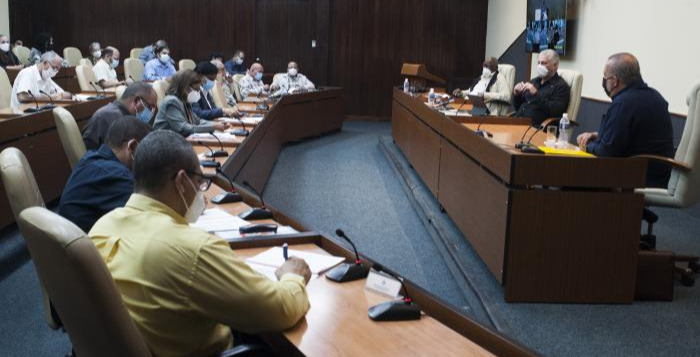 Havana, December 30 (RHC)--Cuban President Miguel Díaz-Canel Bermúdez met Wednesday with state and business authorities and scientists and experts to evaluate the implementation of the Government Management System based on Science and Innovation (SGGCI) in agriculture.

"As a primary sector, food production and agriculture have to be developed; it is a pending task that we must solve despite the low availability of resources and the blockade of the U.S. government," he said.

The President noted that this debate has been going on for years, and no progress has been made.

The Minister of Agriculture, Idael Pérez Brito said the sector employs more than 870,000 workers in its budgeted and non-state areas.

At the end of the encounter, Diaz-Canel pointed out that there are all kinds of innovations to be made in agriculture and forestry, the first of which is organizational.

He reiterated his call to end companies with large workforces that offer expensive and low-quality services, which forced producers to increase prices.

He also criticized the practices of some of them of establishing command-and-control relationships with economic actors such as cooperatives and individual producers.

The First Secretary then reflected on the country's capacity to generate more science and innovation in agriculture because all Cuban universities, he said, have some program or project related to food production, and the agricultural system has an extensive network of research centers.
]