Call for new international caravan against US blockade of Cuba 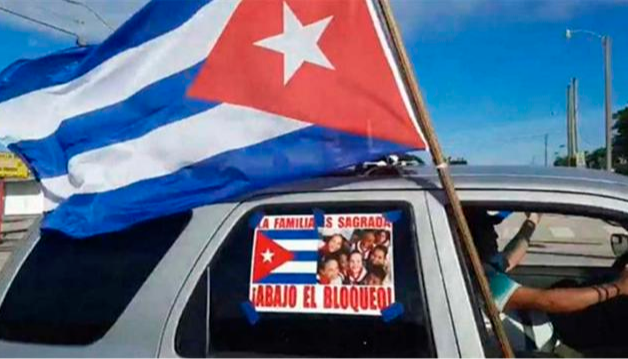 Bridges of Love movement called for a new world caravan

Washington, Sep 25 (RHC) The Bridges of Love movement called for a new world caravan to demand once again the end of the economic, commercial, and financial blockade imposed by the United States on Cuba.

In a new call, activist Carlos Lazo, promoter of Puentes de Amor, pointed out that this mobilization will take place on Sunday to ask U.S. President Joe Biden to put an end to the sanctions that weigh on Caribbean island.

"We call on all people of goodwill in the world to hold events and caravans to demand an end to the sanctions that punish Cuban families," said Lazo in statements to Prensa Latina. The activist said that on Sunday "once again we will raise our voices for the Cuban people so that Biden puts an end to the economic siege imposed on the Island".

Lazo also called on the media to break the other existing blockade, the information blockade that silences this type of initiative, and called on the men and women of goodwill of the world to join the caravan and demand the end of the blockade. He also announced that several U.S. cities such as Miami, New York, and Los Angeles have already confirmed their support and there will also be replicas of the mobilization in Canada, and several European and Latin American countries.

The Biden Administration has announced that it was taking some limited steps to reopen the U.S. Embassy in Havana for processing of visas and that it would allow remittances and the resumption of flights to other cities in Cuba.

But the reality for the Cuban family is that there is a huge gap between the President’s words and deeds. With the exception that there are more flights to the island, there has been no fundamental change in the difficulties created by the U.S. blockade and the 243 sanctions imposed under Trump’s administration.

On the last weekend of each month, the Bridges of Love movement carries out this action to demand that the government of Joe Biden eliminates the blockade imposed by successive administrations in the White House, whether Democrat or Republican.