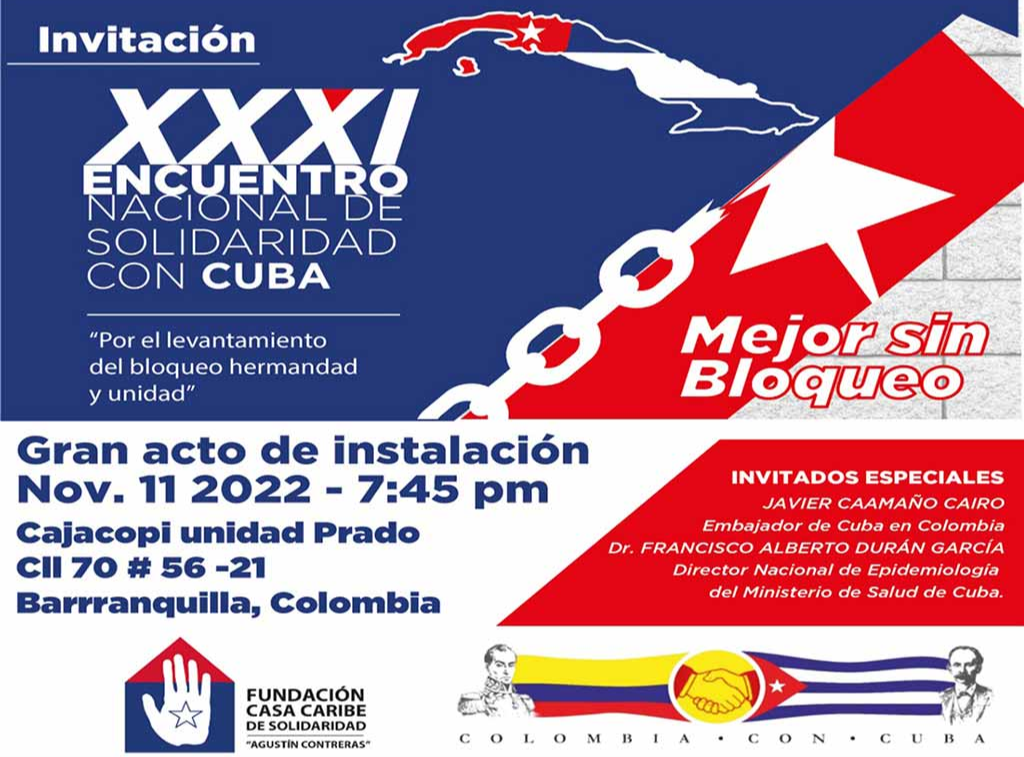 Meeting of Solidarity with Cuba

Barranquilla, Nov 11 (RHC) The XXXI Meeting of the Colombian Movement of Solidarity with Cuba (MCSC) opens today at the Cajacopi events hall, in the El Prado neighborhood of Barranquilla, focused on demanding the end of the U.S. economic, commercial and financial blockade against the island.

The event will be a space for dialogue between leaders and members of the corporations that make up the Colombian Movement of Solidarity with Cuba and national and foreign guests to promote knowledge and brotherhood between both peoples, with cultural and academic events, and to ratify their admiration and solidarity to the revolution.

This year, under the slogan for the lifting of the blockade, unity, and brotherhood with Cuba! the participants will demand an end to that unilateral policy imposed by the United States more than 60 years ago and intensified amid the Covid-19 pandemic.

For the Solidarity Movement, this unilateral measure against Cuba is a flagrant violation of the principle of respect for the sovereign equality of States.

The friends of Cuba will exalt the memory of the great leader of the Revolution, Fidel Castro, "an immortal figure in the history of the struggle for freedom, self-determination, justice, dignity, and solidarity among all the peoples of the planet".

The Meeting will combine virtual and face-to-face formats through which there will be interaction with experts around three thematic axes: No more blockade on Cuba; Cuba is not alone and Cuba and the rest of the world, which will be approached from the components of communication, youth, and solidarity, the announcement said.

Through the projection of documentaries and panels, participants will be able to analyze and discuss the proposals that will mark the path of solidarity.

This major meeting of Cuba's friends in Colombia will be attended by members of solidarity organizations from other countries and special guests, including Dr. Francisco Durán, director of Cuba's Epidemiology Institute.

Previously the Colombian Movement of Solidarity with Cuba has developed a series of actions such as a caravan in Bogota against the blockade, virtual conferences, talks, and others in solidarity with the people and government of Cuba. (Source: PL)