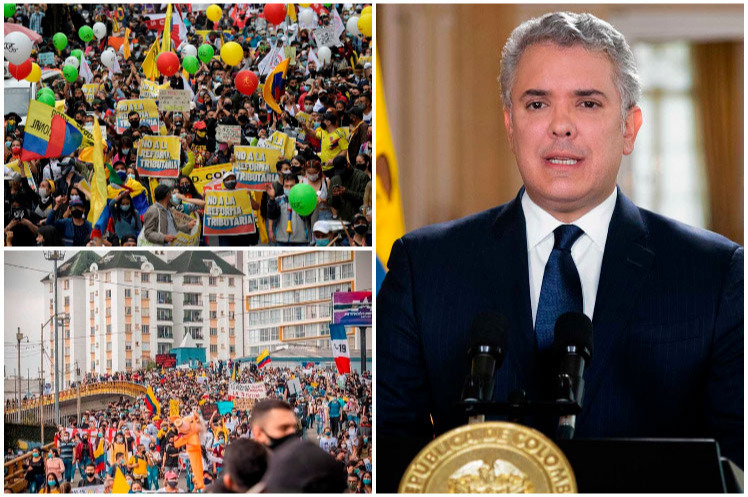 Colombian citizens scored an important victory when they forced President Iván Duque to withdraw a controversial tax reform bill from Congress, since it would have a strong negative impact on the middle and lower social classes.

Colombian citizens scored an important victory when they forced President Iván Duque to withdraw a controversial tax reform bill from Congress, since it would have a strong negative impact on the middle and lower social classes.

Actually, it was a complete blunder, a demonstration that the Colombian administrative power ignore the vicissitudes that the population goes through to survive.

The tax reform was not inoffensive at all, but in times of a pandemic that is raging the South American nation, it would be even more devastating. 2.88 million positive cases have been registered there since the beginning of the health crisis, and over 74,000 people have died. This Saturday, in only 24 hours, there were 18,000 contagions and 495 deaths.

Under these conditions, Duque intended to impose a Value Added Tax, the so-called VAT, of 19% on a group of products, such as eggs, meat, fish, coffee and salt, which would increase the price of the basic food basket.

At the same time, workers with salaries of 2.4 million pesos or more would be obliged to pay income tax, when the minimum cost of living for a single person is about 3.5 million pesos.

The imposition of new taxes on pensioners was also a goal of the bill, but to top it all there was also a proposal to apply an absurd tax charge on burials, as if the grief of families who have lost a loved one were not enough.

Protests across the country began on April 28. Some 7 million people participated, and the cities of Bogota, Medellin, Cali, Barranquilla, Pereira and Bucaramanga stood out.

On Saturday, President Duque said he would make modifications to the program, which did not stop the people's rage and finally yesterday, Sunday, he announced the document’s removal from parliament, and added that it is necessary to hold meetings with various sectors of society to reach a consensus on a new reform.

During these days of demonstrations, the police and the army repressed the population with excessive force and there are mentions of up to ten deaths, although there is no official number of victims.

However, the ideals of unity, determination and courage facilitate the defeat of neo-liberal plans that are being imposed in the region.