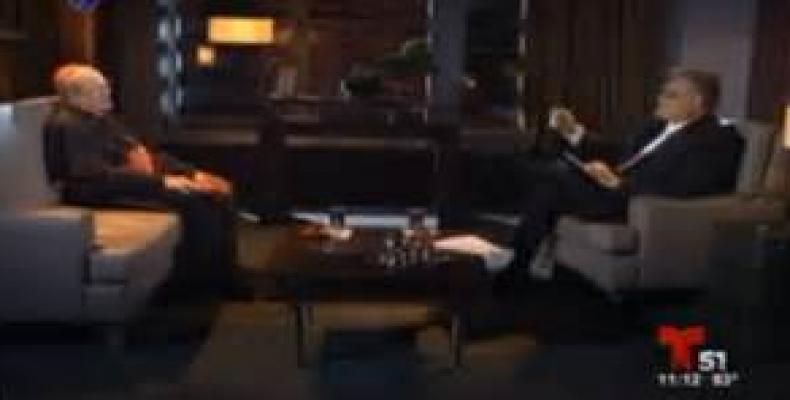 Excerpts of a conversation of the Archbishop of Havana, Jaime Ortega and TV presenter and musician Amaury Pérez on a televised program

The relationship between the Catholic Church and the Cuban State, the visit of the Pope John Paul II in 1998, those crucial moments in which he was named bishop and cardinal, as well as the role the book “Fidel and Religion” played in Cuba, were all aspects included in a conversation with the Archbishop of Havana, Jaime Ortega, in an interview with Amaury Pérez on his television program “Con dos que se quieran 2”. Amaury Perez is a well-known Cuban singer and songwriter who has hosted his popular TV show for several seasons, interviewing personalities from all aspects of Cuban society.

The conversation took place in the context of the upcoming visit of Pope Francis to our country. The cardinal considered the Pope to be the continuation of his predecessors, John Paul II and Benedict XVI, both of whom were also welcomed in Havana. He also reflected about the benefits of being a secular State.

"It was a very important moment when Cuba was declared as a secular State. Cuba wasn't secular at first, not during those first difficult years. The secular State came afterwards, and it was a social improvement just as other States around the world that once had an official religion, be it Catholic or Protestant, have been declared secular, because it represents an advantage both for the Church and the State."

"Benedict declared that the Church's job was not to overthrow governments but to preach the gospel and then you went and told this to Bergolio, who was by then a cardinal and who was about to enter the conclave, and you told him “You're going to be the next Pope and I want to share with you what Benedict has told me”.

"Yes I did, I told him that the Church was not here to change governments, the Church exists to penetrate with the gospel the hearts of men and it is men who will then change the world. When he heard this, he raised both his hands and said that that should be written in a huge banner and placed in every entrance of every city in the world. That was a very important moment for me. It was important to see that he shared my vision and that he would follow the path that his predecessors had traced. They are three different men but with the same feeling that comes from the teachings of Jesus Christ."

"You know that the Popes are welcomed with joy in Cuba but not only by Catholics and Christians but by the entire Cuban people."

"Yes, and the route the Pope will take is already set. It will be around 18km starting from the airport. I think there is a popular feeling like there hasn't been on previous occasions. First of all because the Pope is very well known through media, television and such. His statements have had a large repercussion because they've always been very impressive, so impressive that even his Christmas or Easter messages have been broadcast by Cuban Television. The encyclical letters he has published have had a huge value of Christian faith in our times and what needs to be done today to save the planet. I think that has made him more approachable. He speaks our language. He's Latin American and has mediated between the U.S. and Cuba. John Kerry reminded me of that when he kept thanking the Pope."