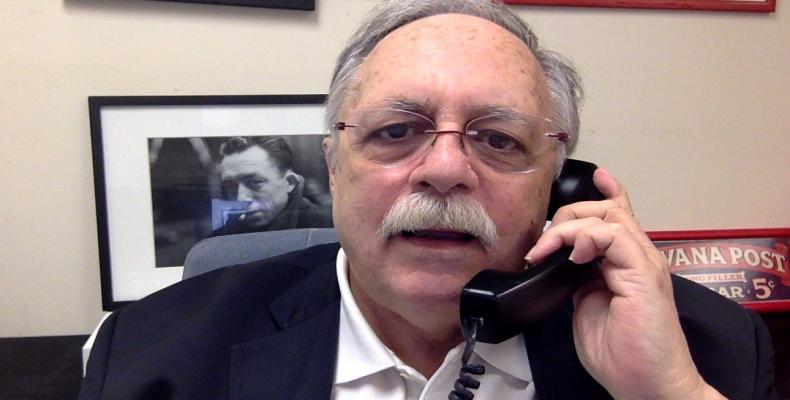 Havana, May 15 (RHC)-- The Donald Trump administration is ratcheting up its hostile actions against Cuba, the latest being the announcement that the island has been included on the U.S. State Department's list of countries that supposedly do not cooperate fully in the fight against terrorism.

RHC:  Attorney Pertierra, why do you think that the U.S. has chosen this particular moment to include Cuba on the list of countries that do not cooperate in the struggle against terrorism?

Jose Pertierra: The Trump regime is totally focused on the presidential election of November 3rd of this year. He thinks -- mistakenly, I maintain-- that a hard line against Cuba and Venezuela can guarantee that it can carry the state of Florida. Whoever wins Florida gains 29 electoral college votes—the same number as New York. Only California and Texas have more electoral college votes. Experts agree that if the republicans lose Florida, they will lose the election.

The election strategy of the Trump campaign is to ally itself with the extremists in Miami such as Marco Rubio, Mario Diaz-Balart, Carlos Curbelo and others in sort of a "crusade" to liberate Cuba and Venezuela from communism. This will permit the campaign to raise much-needed funds and agitate the "comecandelas" of the southern part of Florida to go to the polls and vote for Trump.

The aim of the Trump regime's Latin American policy is to dismantle the advances made by the government of Obama in the region, especially concerning Cuba. With the shift of policy that he announced in December of 2015, Obama tried to punch some holes into the blockade. He also freed Gerardo, Tony, and Ramón from prison, where they were being held unjustly. Thanks to the successful negotiations that both governments carried out, Cuba opened its embassy in Washington and the United States its own in La Habana.

The Obama policy left Miami's right-wing extremists furious and frustrated. After taking office, Trump promised to turn the clock back to the Cold War politics of yesteryear against Cuba.

The United States cynically announced the inclusion of Cuba on the list of countries that do not cooperate fully with its efforts to counter-terrorism.

This comes on the heels of a brazen terrorist attack against the Cuban Embassy in Washington.

Only a few days ago, a terrorist of Cuban origin with ties to Miami-based groups filled with hatred against the island, as well as overt passion for his hero Trump, sprayed the embassy with 32 bullets from an AK-47 automatic weapon.

After the terrorist attack, Cuba has been pressing the United States for assurances that its diplomats will be protected from future attempts on their lives and for information regarding the terrorist who attacked the embassy.

These requests in the form of Diplomatic Notes have fallen on deaf ears. Instead, Washington announced that it would be including Cuba on a list of countries that do not cooperate fully with its efforts to counter-terrorism.

In other words, Cuba—a country that has been victimized by terrorists for over 60 years, terrorists such as Luis Posada Carriles and Orlando Bosch who were trained and protected by Washington for decades—is instead now vilified by the United States government and put back on a black list linked to terrorist countries.

We should remember that Luis Posada Carriles, at the service of the CIA for decades, was the mastermind of one of the worst terrorist attacks in the Western Hemisphere. He and his buddy Orland Bosch blew up a Cuban passenger plane, killing 73 people aboard, including a 9-year-old little girl named Sabrina.

Now the U.S., the country that trained and protected anti-Cuban terrorists for decades, the country that has failed to comply with its obligations to safeguard the Cuban embassy in Washington, in violation of the Vienna Convention on Diplomatic Relations, has the gall to accuse Cuba of not collaborating in the fight against terrorism: this is the height of cynicism.

Many experts agree that this business of putting Cuba on the list of countries that don't cooperate in the fight against terrorism is a prelude to including it in an even more nefarious list: the one regarding countries that sponsor terrorism.

A high-level Trump Administration source confirmed to Reuters yesterday that the White House is considering doing precisely that.

José Pertierra: Well, Roberto, there is a great deal of difference: legal, commercial, and political. Putting Cuba on the list of states sponsors of terrorism would submit the island to severe prohibitions regarding the sale and purchase of goods and technology, as well as seriously hamper Cuba from obtaining international financial assistance. Even something as simple and necessary as opening a bank account to operate the embassy in Washington is crippled by Cuba being on such a list because the reporting requirements on banks are so onerous that they have a chilling effect on banks, which then refuse to open up these accounts.

It would also permit the U.S. to sanction other countries that would send military assistance and-or hardware to Cuba.

RHC: How would the implementation of such a decision impact US-Cuba relations?

José Pertierra: One of the biggest obstacles that Obama faced in wanting to normalize diplomatic relations with Cuba was its inclusion on the list of state sponsors of terrorism.

The United States customarily does not negotiate with terrorists or terrorist nations. Some congressmen that opposed his opening to Cuba pointed to this blacklist to drum up support against the Obama opening.

That is why the Obama Administration made sure to remove Cuba from the list of state terrorists where it had been for over three decades. Six months after having done so, Obama announced the rapprochement to Cuba.

The enemies in Washington and Miami of the Cuban people know this, and that is why they are so keen to position Trump to put Cuba on the blacklist once again. The idea is to tighten the screws on the blockade and, just in case Trump loses in November, place obstacles in Biden's path, in case he were to want to normalize relations with Havana.

I live in the belly of the beast, 10 minutes from the White House. There is a lot of hatred here against Cuba and Venezuela. Against immigrants, against Latinos, against black people and the poor. We have to struggle to change not only this government but also this society. No será fácil. It won't be easy or quick.

Thank you, Roberto. A strong abrazo for you and for the Cuban people who have so bravely resisted the incessant terrorist attacks, many of them planned and financed from U.S. shores, that have claimed the lives of over 3,000 Cubans over the years.