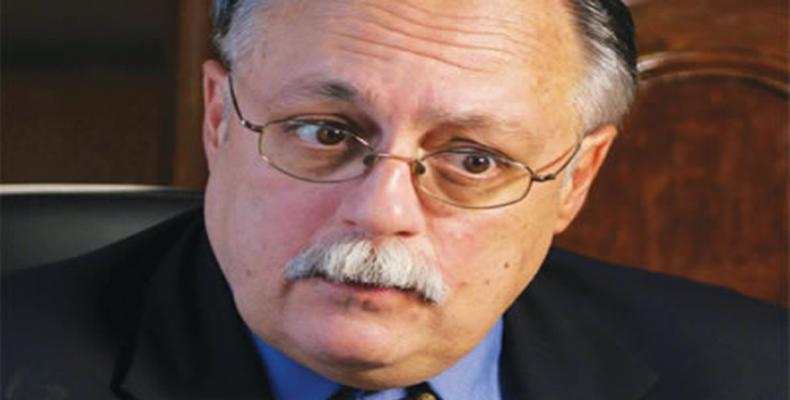 Radio Havana Cuba's Roberto Bastidas presents an exclusive interview with Cuban-American lawyer and political analyst José Pertierra.  They talk about the new book by John Bolton, former U.S. National Security Advisor to Donald Trump called "The Room Where It Happened."  José Pertierra, who is based in Washington, DC, has read an advance copy of the book and comments about John Bolton's take on his time inside the White House, including Trump's foreign policy decisions with regard to regime change in Venezuela.

QUESTION: Have you read the Bolton book?

PERTIERRA: Yes, I received an advance copy. The book describes a White House that appears more like the old television series Peyton Place (with gossip and backstabbing) than a functioning government.

Prior to the book´s release, Bolton claimed that he had a lot of secrets to tell about Trump. The Congress asked him to testify during the impeachment proceedings and tell the legislators what he knew about Trump´s bribery of Ukraine´s president: US arms in exchange for Ukrainian dirt on Biden´s son. However, Bolton refused to testify, apparently because he wanted to make a lot of money from the sale of his upcoming book for which he already pocketed $2 million from Simon & Shuster even before the book´s release.

QUESTION: Can you give us some examples of things that struck you most in the book?

The book, The Room Where it Happened, describes a pathetically incompetent president Trump, prone to major gaffes such as asking his then chief-of-staff, General John Kelly, whether Finland is part of Russia or being surprised during a meeting with then British Prime Minister Theresa May at learning that the United Kingdom is a nuclear power.

In the 592-page book, Bolton, paints a troublesome picture of the president´s top ministers and advisors frustrated with Trump´s fecklessness and volatility. Chief of Staff General John Kelly, Secretary of State Pompeo, Bolton and others all expressing an inclination to resign. Bolton quotes General Kelly saying to him: “What if we have a real crisis like 9/11 with the way he makes decisions?” Kelly is quoted as asking at one point as he considers resigning.

QUESTION: We know that Bolton played a key role in the attempt to remove President Nicolás Maduro from power. What does Bolton say about that episode in the book?

Bolton dedicates an entire chapter to Venezuela and cynically calls it Venezuela Libre. He first characterizes the government of President Nicolás Maduro as repressive and claims that the crisis in Venezuela presented the US with an “opportunity” that Trump squandered, because he “vacillated and wobbled … impeding (Bolton´s) efforts to carry out a policy of regime change. Although he quotes Trump as gleefully saying that “it would be cool to invade Venezuela”, as if such an invasion was something akin to a videogame that a twelve-year old might play.

It is time, says Bolton in the book, “to resurrect the Monroe Doctrine” that Obama had buried. Therein lies the justification for intervention in Venezuela. It has nothing to do with human rights or humanitarian aid. The Trump regime believes that Venezuela, indeed all of Latin America, belongs rightfully to the United States.

Trump goes a bit further than Bolton, or perhaps he simply articulates the Monroe Doctrine in a less sophisticated way. Bolton recounts that Trump ordered military options for Venezuela, and then instructed Bolton to be sure that (after the fall of the Maduro government) the US should “keep” Venezuela because “it´s part of the United States anyway”. He insisted to Bolton to be sure that after Maduro´s ouster the US would “keep the oil”.

QUESTION: Does Bolton say how the US planned to oust President Maduro from power?

Yes. It is clear from the book that the US is still financing and directing the attempts at regime change in Venezuela. Trump would prefer, according to Bolton, the military option, but Bolton admits in the book that, rather than using the military option, the US could accomplish regime change in Venezuela by instead “working with the Venezuelan opposition”. He claims to have been the one who suggested that Venezuela be listed as a state sponsor of terrorism and Cuba as well, as a way of tightening the economic screws on both countries.

Bolton describes in the book how the US focused on hitting the Venezuelan oil industry, as well as choking off Venezuela´s access to its gold reserves in London. Trump reportedly asked the Defense Department for details on the interdiction at sea of oil shipments between Venezuela and Cuba.

QUESTION: Yet the US plan for regime change has failed thus far. Does Bolton know why?

Bolton calls the decision of the White House to close the US Embassy in Caracas on March 11 of last year a “wrenching decision”, because it left the US government without the eyes and ears necessary to oversee the operation on the ground. He attributes the failure of regime change, among other things, to that decision. Although he does not say so in so many words, US led coups in Latin America have always been directed by US embassy personnel.

Interestingly, Bolton recounts that Trump thought the opposition´s maneuvers would not succeed, because Nicolás Maduro was “too smart and too tough”. This apparently surprised Bolton. About Guadigo, Trump is quoted as saying “this kid (Guaido) nobody´s ever heard of him”. But knowing that Guaido was the only card that Bolton had given him to play, Trump said, “I want him to be loyal to the US and to no one else”.

The book shows how little Washington understands Venezuela. The major premise that the US applies in trying to understand Venezuela is that Nicolás Maduro is a product of Cuban intervention, and that Cuban intelligence tells him what to do. This shows that Bolton neither knows Maduro, no does he know the Cubans. The Nicolás Maduro I know does not follow directives from abroad, and the Cuba I know is respectful of the sovereignty of its allies.

QUESTION: Thank you, Mr. Pertierra, any final thoughts about the book?

Yes. Bolton concludes the book with a reflection that Trump´s national security decisions turned on political considerations regarding the upcoming November election and not on philosophy or ideology. Bolton argues that “a second-term Trump will be far less constrained by politics than he was in his first term” and that the Democrats will more pleased with a “legacy-seeking” Trump in his second term.

I agree with Bolton that the guard rails of electoral politics restrain some of Trump´s instincts and that without them he will decide things differently. But I differ with Bolton that Trump will be looking to shore up his “legacy” and will lean left should he win the election. Trump is a white supremacist and an authoritarian thug who has a big enemies´ list of anybody who has ever dissrespected him as far back as, perhaps, the 4th grade. A second term, without what Bolton calls the guardrails of politics, would present Trump with an opportunity to seek vengeance on his perceived enemies and to impose on the United States a Mussolini type of fascism. In other words, a second term would allow free reign for Trump to be Trump.