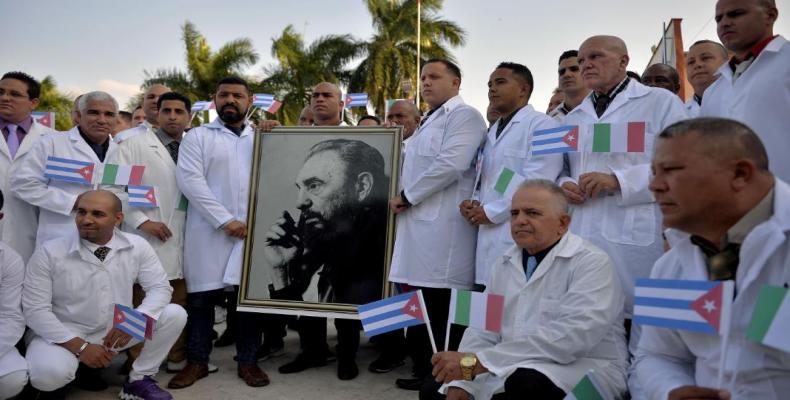 A documentary film co-produced by the Cuban Radio and Television Institute (ICRT), the Cuban Film Institute and the Public Health Ministry has begun shooting in different locations across the country.

Entitled ‘Esclavitud que te libera’ (Slavery that frees you), the documentary film aims to refute the slander campaign in the mainstreams media that tries to discredit Cuba’s international medical cooperation and the altruistic work developed by hundreds of thousands of Cuban health professionals, who have fulfilled missions abroad, saving lives and bringing health and hope to millions of people the world over. Shooting of the documentary began in late 2019.

In statements to Cuban press, director Rigoberto Senarega Madruga said the audiovisual aims to refute false accusations by enemies of the Cuban Revolution who have repeatedly charged that Cuban health professionals are slaves and that the Caribbean state is engaged in Human Trafficking.

He stressed that his documentary film has now become more necessary, as the slander campaign against Cuba has escalated disproportionately amidst the current Covid-19 pandemic and Cuba’s gesture to send medical contingents, members of its Henry Reeve International Brigade of Doctors Specializing in Disaster Situations and Serious Epidemics, as front liners to more than 30 nations the world over, at the request of those nations’ governments, to assist in the global fight against the deadly disease, which in roughly six months, has already sickened more than 16 million 2 hundred thousand people and claimed over 640 000 lives.

With a vast work as a documentary filmmaker, Rigoberto Senarega Madruga directed the work ‘Gracias por el miedo’, which compiles the testimony of hundreds of Cuban war correspondents during the war in Angola. It was for this documentary film that the Cuban popular duo Buena Fe composed its single ‘Valientes’, which has now become an anthem that describes the altruistic, humanitarian work being carried out by Cuban health professionals sent abroad to fight the Covid-19 pandemic.

The new documentary film ‘Esclavitud que te libera’ compiles the testimony and experiences of hundreds of Cuban health professionals, who have fulfilled missions abroad, and are today offering their services in remote regions across our country. Given the new circumstances, marked by the current pandemic, the documentary film includes also the testimony of Cuban health professionals, who have already returned home after successfully completing missions in Italy and the Principality of Andorra.

According to the director, the documentary film aims to reveal the true nature of those Cuban health professionals, meet the human being beneath the white coat, the high human values instilled in them from day one of their training as health professionals.

Among the testimonies compiled is that of Doctor Edelsy Delgado Díaz, from Cienfuegos province. After defying death in Andorra, as a member of the Cuban medical contingent sent there to assist in the fight against Covid-19, he is now taking care of his children, while his wife, also a member of Cuba’s Henry Reeve Brigade, is right now fulfilling a similar mission in Monserrat, a British overseas territory in the Caribbean.