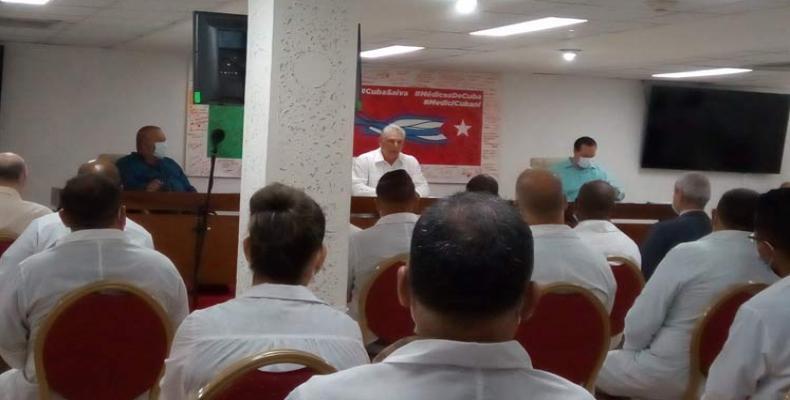 Havana, July 29 (RHC)-- Cuban President Miguel Díaz-Canel Bermúdez met on Wednesday with health care workers who helped against the COVID-19 in Turin, Italy, and St. Vincent and the Grenadines.

The Ministry of Public Health, reported on Twitter on the meeting, in which they shared experiences on the work developed in the fight against the disease in those countries.

Upon receiving both brigades virtually, in order to respect the established epidemiological security protocols, the president had confirmed that once their quarantine period was over, he would meet them to exchange ideas on how to improve the work in Cuba.

The group of 38 specialists, members of the Henry Reeve contingent that served in Turin for three months, returned to the Caribbean nation on the 20th, after treating more than 170 patients, with only one death.

Meanwhile, the 12 health collaborators who fought the pandemic in St. Vincent and the Grenadines for almost the same period of time, returned on the 17th, after 15,000 medical consultations and around 200 surgeries.

The  Henry Reeve brigade against natural disasters and serious epidemics has currently deployed 45 contingents in 38 countries and territories, with 3,772 members, the Cuban head of state said Monday..

In his speech at the Meeting of Leaders for the 30th Anniversary of the Sao Paulo Forum, Díaz-Canel said that these specialists have treated more than 250,000 patients with the new coronavirus disease and have saved more than 8,000 lives.

This is in addition to the work of the 28 thousand health professionals who were already working in 58 countries before the beginning of the health emergency and who have joined the national and local efforts in the fight against this disease, with 83 thousand 268 patients of COVID-19 treated and 13 thousand 636 saved.