Cuban and foreign musicians built a virtual ‘Bridge to Havana’ 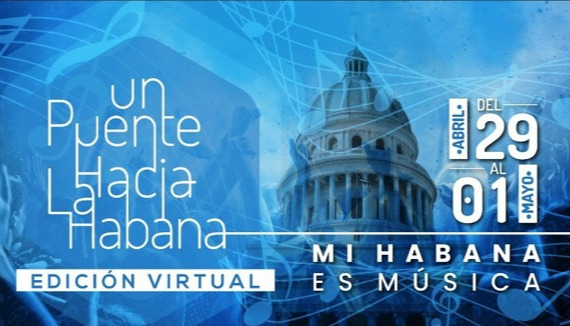 Havana, May 2 (RHC)—The tenth edition of the music festival (Un puente hacia La Habana) or ‘A bridge to Havana’ was held over the weekend, this time on social media due to the Covid-19 pandemic.

Created and directed by Jorge Luis Robaina, leader of the group Karamba, the three-day event was sponsored by by Cuba’s Record and Musical Editions Company, EGREM.

With the slogan ‘Mi Habana es Música’, the festival developed a broad virtual program of activities that included concerts, debates, the release of audiovisual materials, interviews with Cuban and foreign musicians and other personalities from the world of music, and even a photo contest with a prestigious jury selecting the best selfies with music and painting themes.

Cuban and foreign musicians, journalists, musicologists who participated in the online debates addressed the challenges arising from the impossibility to hold mass concerts and in-person presentations due to Covid-19, and ways to promotes artists’ works in the new circumstances and generate income in the digital era.

Highlights of the Festival included the presentation of the second volume of the CD ‘A Bridge to Havana’, featuring artists such as duo Andy y Lucas, Carlos Torres, Buena Fe, Waldo Mendoza, David Blanco, among others, and the release also of the CD ‘Atrevido’ by the group Karamba.

The album includes salsa versions of iconic pieces of Jorge Luis Robaina and his group Karamba like ‘Vivir la vida’ and ‘Dale que ya montó’ and others by renowned foreign musicians from the 1980s and 90s like ‘Lo mejor de tu vida’, written by Manuel Alejandro and popularized by Julio Iglesias and ‘Amor, amor’, written by Rafael Pérez Botija and popularized by none other than Mexican singer José José.

Other highlights included also the streaming of two editions of the program ‘Un ratico con Jorgito’, with regular host Jorge Luis Robaina interviewing foreign musicians over the internet and sharing also fragments of interviews with Cuban musicians from the catalog of Musicalia agency.

The Festival ‘A Bridge to Havana’ aims to unite music professionals and create alliances in a unique environment to assess both the benefits and challenges to the music industry in the current context.