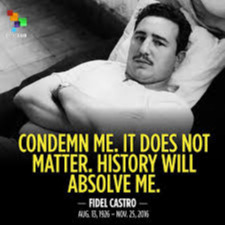 Havana, July 27 (RHC)— La Historia Me Absolvera (History will Absolve Me), Fidel Castro's self-defense allegation during the trial for the attacks on the Moncada and Carlos Manuel de Cespedes barracks in 1953, was translated into Tamil language in Sri Lanka.

Cuban Ambassador to the South Asian island country, Andres Gonzalez, was given a copy of the iconic text in Tamil language, translated by activist and translator Gayathri Ganathapillai.

Tamil is one of the two official languages in Sri Lanka, spoken by some 75 million people in Sri Lanka and also in India.

In the trial for the attacks on the Moncada and Carlos Manuel de Cespedes barracks on July 26, 1953, Fidel, then a young lawyer, assumed his own defense. He took the opportunity to denounce the ills of Cuban society, which the revolutionaries were seeking to correct, which were summarized in six pivotal issues: land ownership, industrialization, housing, unemployment, education and health care.

Fidel said the attacks on the Moncada and Carlos Manuel de Céspedes barracks was the revolutionaries’ last resort, following the military coup staged by Fulgencio Batista in 1952, which cancelled planned election.

Fidel’s defense allegation was later published under the title ‘History will Absolve Me’ in reference to his closing phrase, when he told the jury ‘condemn me, it does not matter, history will absolve me.’