Technical Congress clears the way for the 61st SNB 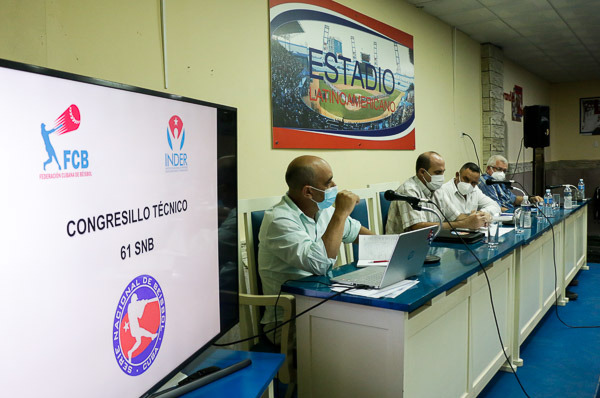 The officialization of the 16 rosters of 40 players and the competition calendar, plus the approval of the regulations, were announced after the technical meeting of the 61st National Baseball Series.

Havana, January 14 (RHC)-- The officialization of the 16 rosters of 40 players and the competition calendar, plus the approval of the regulations, were announced after the technical meeting of the 61st National Baseball Series.

Juan Reynaldo Pérez Pardo, national commissioner of the discipline, discussed a wide list of matters with the journalists gathered in the Adolfo Luque Hall of the Latin American Stadium.

It was ratified that there will be 75 games for each team and that the post-season, without the selection of reinforcements, will be played in a best-of-four series of seven games.

The rosters of the teams are composed of 40 players, except for those who have athletes contracted abroad through the Cuban Baseball Federation (FCB), cases in which additional players may be declared taking into account the absence of the former for considerable periods of time.

Throughout the Series there will be 40 players eligible for the mentor, although only 25 can be used in each game.

The athletes contracted through the FCB may sign and cancel their contracts at the appropriate time, according to the characteristics of their contract, unlike the so-called reinserted players, who must be declared in the list of each team.

The latter must have played in the competition before game 61 and in order to play in the post-season they must accumulate 40 at-bats or 20 innings pitched, as the case may be.

Youth athletes of interest to the national team may also join and leave the rosters at any time, according to the needs imposed by the group preparation and the international calendar.

The challenges of the event will start at 1:00 p.m. and will move to 2:00 p.m. when daylight saving time is imposed again in the country. For the recovery of postponed or interrupted matches, the 10 a.m. schedule may be used. In the event of a doubleheader, it will be played in seven innings, unless one of the games has already started.

Perez Pardo acknowledged that efforts and evaluations are being made so that some venues may hold night games, but there is no final decision in this regard due to the state of the lights and the energy cost.

Regarding the anti-COVID protocol, the director reiterated the strictness of what has been approved and commented that it has been proposed to keep the teams on the field as long as the positive cases do not exceed three among the athletes and four among the officials. The matter is still being evaluated with the country's health authorities.

The presence of the public is expected to be 50% of the total estimated capacity, as long as the epidemiological conditions of the territory allow it.

As for the ticket prices to the stadiums, INDER vice-president Omar Venegas explained to JIT (via telephone) that they will be set by the provincial governments, based on proposals made by the respective INDER directorates.

Regarding gastronomy and other services in the parks, it was explained that they will depend on the possibilities and indications issued in each territory, always complying with the anti-COVID protocol.

Perez Pardo expressed his confidence that the head stadiums will all be ready on January 23, the opening date of the competition, and detailed the progress in the benches of the Calixto Garcia de Holguin and in securing the lighting tower (danger of collapse) in the 26 de Julio de Artemisa. This is where the greatest concerns are concentrated.

He also reiterated the holding of a selective series at the end of the year, between November and January, with the participation of six teams: the champion of the 61st SNB, the Cuba U-23 and four other regional teams. The U-23 National Baseball Series follows on the calendar, between July and September.

Asked about the time to elect the new president of the Cuban Baseball Federation, Pérez Pardo said that the election process establishes that process for the end of this month.

The uniforms and the main means and implements for the event will be of the TeamMate brand, acquired by the FCB. This brand only sponsors national teams.