Report on economic achievements in 2019 and goals for 2020 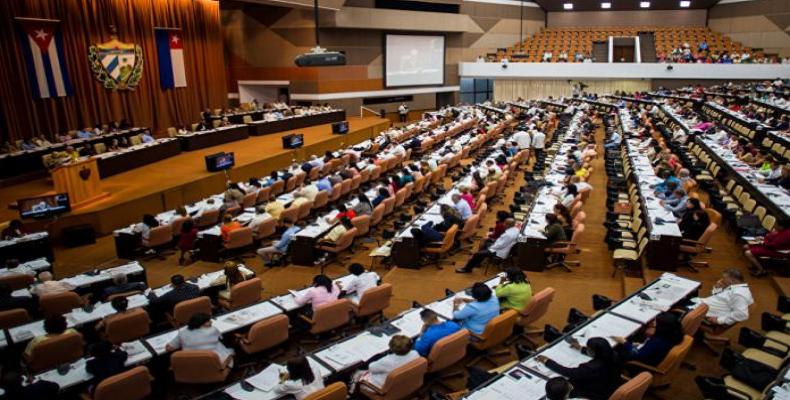 The following summarizes reports to the National Assembly on the economy by Diaz-Canel and Gil.

That a small economy, besieged by the superpower, would show signs of vitality and would attain a growth of 0.5%, similar to the region of Latin America and the Caribbean, undeniably speaks of the management of its government and the conduct of its people.  This is the case of Cuba in 2019, a year in which the United States intensified the economic and commercial blockade and the financial persecution, and activated measures to suffocate its development.

So expressed the Cuban president, Miguel Díaz-Canel, at the conclusion of the fourth session of the 2019 National Assembly of People’s Power, at the end of December, when he affirmed that every seven days another measure was taken to tighten the screws and to increase aggression.

“Cruise ships, flights, remittances, medical services, financing, transportation of fuels, and insurance policies were canceled, restricted, or prohibited.  There is no area free of the hunt, the siege, or the persecution.  No project or revolutionary action was beyond defamation.  The measures adopted were designed to sabotage the foreign commerce of Cuba and to create obstacles to financial transactions with third countries, including payments, charges, and the possibility of credit.  They seek to interrupt the supplies of national industry, to limit access to technology and to sources of capital and income, with particular actions directed against the transportation of fuel, tourism, and international health services.”

The President pointed out that the strategy of the Cuban government is to maintain economic levels in important sectors and to minimize the impact planned by Washington.  The principal effort is directed toward energy saving, toward analysis of potential and reserves to increase the exportation of goods and services, leading to an increase in income in foreign currency.  A key aspect in the directives approved by the government is adjusting to the available resources and not increasing indebtedness and charges to foreign accounts, and to ensure internal monetary equilibrium.

Alejandro Gil Fernández, Minister of Economy and Planning, informed the National Assembly of People’s Power of the measures adopted, despite the tense situation.  Among them, the increase of the salaries in the state sector, which benefitted more than one million, 400 thousand workers; and the initiation of sales in freely convertible money, in order to confront, from the supply side, the departure of foreign currency from the country.

In addition, twenty-eight actions were approved to strengthen the socialist state company, which will eliminate snags and will strengthen the most important economic actor in the Cuban social and economic model.  With respect to tourism, “It is estimated the arrival of more than four million, 300 thousand visitors.  Although it does not comply with the annual plan, it is meritorious performance.. . .  Moreover, this year 43,700 housing units were constructed, in order to improve the quality of life of the population.”

In spite of the restrictions on the economy, employment increased by 32,500 jobs, the majority in the non-state sector.  There were advances in the availability of information technology in the society.  Important investments were carried out in the country, attaining an amount of more than ten billion pesos, in spite of the tensions with fuel that caused the paralysis or slowdown of some investments.  The Minister of Economy and Planning also pointed out the work in the Mariel Special Zone of Development.

In general terms, the most outstanding results were obtained in tourism, telecommunication, nickel, pharmaceutical produces, tobacco, sugar, run, charcoal, and mining products.  For the coming year, the economic plan gives priority to the increase and diversification of exportations, import-substitution, efficiency in the investment process, the maintenance and increase of savings in energy consumption, increasing ties among all the economic sectors, and taking advantage of measures approved to give impulse to the economy.

There is ahead an important task, asserted President Díaz-Canel.  “We are able to assure you that the monetary organization is in an advanced phase of study and approval.  Presently, the efforts are concentrated in the comprehensive evaluation of each theme; the development of judicial norms; the organization and carrying out of training, and social communication.  It is a comprehensive and complex process, which will have an impact on the entire society, and it will be applied in a planned sequence, minimizing the effects on the population.”