Dilma Rousseff Testifies in Brazilian Senate Ahead of Impeachment Vote 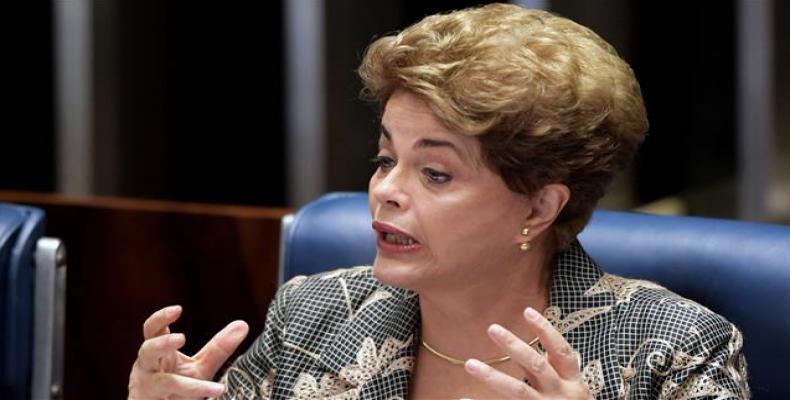 Brasilia, August 29 (RHC)-- In Brazil, suspended President Dilma Rousseff took the stand Monday morning in her impeachment trial, and in measured but blunt language denied any criminal wrongdoing in handling her country's budget.  Dilma also strongly criticized the effort to remove her from office as a "coup" orchestrated by Brazilian politicians to stop a federal investigation of allegations of bribery and influence-peddling.

During a half-hour statement, Dilma Rousseff said: “I am here to look directly in your eyes to say with serenity that I have nothing to hide.  I did not commit the crimes that I am accused of.”

Rousseff argued that it is not "irony" but "deliberate" that the leaders of the impeachment bid — particularly former speaker of the lower house Eduardo Cunha — are deeply embroiled in corruption charges while she has not been guilty of any fraud and bribery charges.

"I have never enriched myself with public funds, and I have never manipulated budgets to benefit myself," she said. "I have acted honestly, and I will now be tried for crimes I have not committed."

She said that she has "paid a heavy price" for working, along with her predecessor Luiz Inacio Lula da Silva, to create the "necessary conditions" for state corruption to be thoroughly and independently investigated, without government interference.  She also alluded to wiretap recordings leaked in the weeks after her suspension in May that revealed that high-level opposition figures had schemed to halt corruption investigations against them and their allies through ousting Rousseff from office. She claimed that these "powerful forces" and political interests are working for her destitution.

In a firm and level manner, Rousseff recalled the dark history of the dictatorship in Brazil, during which she suffered torture under the reign of state terrorism.

"I continued fighting for democracy, I dedicated all those years of my life to fight for a society without hate and with tolerance, free of discrimination," she continued. "I also fought for a society where there would not be poverty ... a sovereign Brazil. I feel proud of this."

"Decades later, I won’t be tortured, I won’t go to jail. My accusers were elected by popular vote," she continued. "I’m afraid that once more democracy will be condemned with me ... Now I fear the death of democracy."

The suspended president, who will face a final vote in the Senate on Tuesday on whether to permanently remove her from office or not, argued that the interests of the political and economic elite were repeatedly hurt at the polls during the years that she and her predecessor Lula da Silva governed the country, which motivated them to level baseless accusations against her in a thinly-veiled undemocratic power grab and "pretext for a coup."

"The proof makes clear … that the accusations against me are a pretext," she said, adding that the interests of the elite threaten democracy.  "What’s at stake is the future of the country."

Supporters showered Rousseff with flowers as she arrived at the Senate and gathered outside in solidarity during the suspended president’s statement.

Dilma Rousseff, who has firmly resisted her rivals' calls for her resignation in the months leading up to the impeachment trial, reiterated that her commitment to democracy and the rule of law, together with the solidarity of her supporters, especially women, has kept alive her resolve to fight despite the bitterly hostile campaign against her.

"I must admit that the betrayal and violence of discrimination and prejudice scared me … But I have overcome," she said, also condemning the role of Brazil's corporate media in whipping up support for her removal from office. "I had the solidarity of millions of Brazilians all over the country ... Our people fought against this coup."

"Brazilian women during this time have supported my resistance ... They are partners in this battle against misogyny and prejudice," she continued, after having criticized Michel Temer, the unelected "interim" president installed through her ouster, for not having appointed a single woman to his Cabinet. "Brazilian women expressed that we are fighting for democracy and our rights."

Rousseff has previously argued that as the first woman president of the country, she has been subject to undue scrutiny and suffered disrespectful treatment that a male president would not face due to ongoing sexism that projects stereotypes on women in the country.

The suspended president concluded her statement by saying that she respects even those Senators pushing for her impeachment, calling on them to impartially assess the evidence. She appealed in particular to the Senators remain undecided in how to cast their ballot in the final impeachment vote Tuesday, but added that she will "not have any resentment" toward her accusers and those working to remove her from office.

"Senators, I trust that you will act fairly. These accusations are unfair and unfounded," she said as she wrapped up her address. "Removing me from office is the equivalent of a democratic death penalty."

After her testimony, Rousseff faced questioning from Senators, which is set to be followed by a debate between the defense and prosecution.

The lengthy impeachment process will come to a close Tuesday as Senators vote on whether or not to remove Rousseff form office. A two thirds majority, or 54 of 81 Senators, is required to seal the impeachment and install the "interim" government of Michel Temer permanently.

The impeachment bid has been widely condemned as a parliamentary coup due to the lack of legitimate accusations against Rousseff that would justify her removal according to the Brazilian constitution. Rivals long attempted to paint their campaign as an effort to root out government fraud, but rampant corruption in the ranks of her opposition and leaked wiretap recordings shedding light on the motivations behind the impeachment bid have laid bare that the power grab is more about protecting than prosecuting corruption.

Some 60 percent of the 594 members of the Congress, which has driven the impeachment process, face major criminal charges, including serious corruption and bribery offenses and even kidnapping and murder.