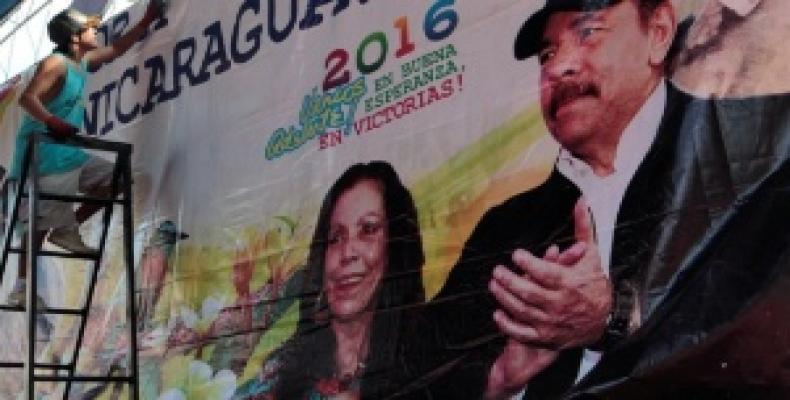 Managua, October 20 (RHC)-- Nicaraguan President Daniel Ortega and wife Rosario Murillo have 64.2 percent support among voters ahead of the general election on November 6, according to a poll published Tuesday.

The poll, organized by M&R Consulting, puts the candidates of the Sandinista National Liberation Front, the FSLN, well ahead in the upcoming elections.  The report says the couple inspire favorable opinions in several sectors of the country and represent voter interests around security, the future, experience and ability to govern.  The study reports that 62.1 percent say they have confidence in the transparency of the electoral process.

The Nicaragua Investment Conditionality Act is designed to -- in the words of the U.S. legislation -- "stop Ortega from accessing international funds until he adopts reforms that promote democracy, strengthen the rule of law, respect human rights, and celebrate free, fair, and transparent elections supervised by electoral observers."

The government of Daniel Ortega responded, denouncing the bill as “part of the interventionist policy that throughout history has intervened in our internal and sovereign political, social and economic processes.” For years, the U.S. has imposed sanctions on countries with governments that are not aligned with Washington's policies.

The sixth National Electoral Survey interviewed 2,000 people from 15 different departments and autonomous regions of the country between October 11th to the 15th.  On November 6, Nicaraguans will also vote for 90 members of the National Assembly.