Venezuelan President Maduro Meets with Pope Francis at the Vatican 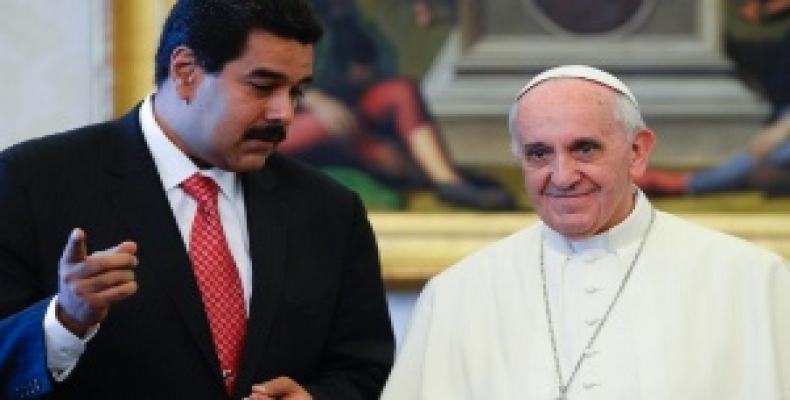 Vatican City, October 25 (RHC)-- Venezuelan President Nicolas Maduro met with Pope Francis at the Vatican on Monday in a private visit as he wrapped up multi-country trip to oil-producing nations in the Middle East to discuss the global price slump.

A statement from the Vatican said the previously-unannounced meeting “took place in the framework of the worrying situation of the political, economic and social crisis that the country is going through and which is weighing heavily on the entire population.”

The visit comes after Venezuela’s National Assembly announced plans to launch an impeachment process against Maduro after authorities decided to suspend the recall referendum against the president over irregularities in the signature collection process.

The Vatican statement said that Pope Francis, speaking with “the well-being of all Venezuelans in his heart,” urged Maduro to resolve the tense political situation in the country through dialogue.

The recall referendum has been the flashpoint of political debate in the country in recent months as the opposition has called for repeated protests while the Maduro government and electoral authorities have said a vote can move forward if the opposition goes by the rules of protocol.

Pope Francis “urged (both sides) to show courage in pursuing the path of sincere and constructive dialogue, to alleviate the suffering of the people, particularly of the poor, and to promote renewed social cohesion, which will allow the nation to look to the future with hope,” the Vatican statement reported.

The meeting marked the second time Maduro has visited the Vatican after also meeting with the pope in 2013.

One of the Pope’s 17 new cardinals announced earlier this month, Venezuela’s Baltazar Enrique Porras Cardozo, archbishop of Merida, is a vocal critic of Maduro and his predecessor, late President Hugo Chavez, according to the Catholic publication Crux.  He has also been accused of working behind the scenes in the failed coup against Chavez in 2002.

Pope Francis has expressed willingness to help mediate dialogue in Venezuela.  The Pope earned political fame in recent years for his role in mediating the thaw in relations between the United States and Cuba.