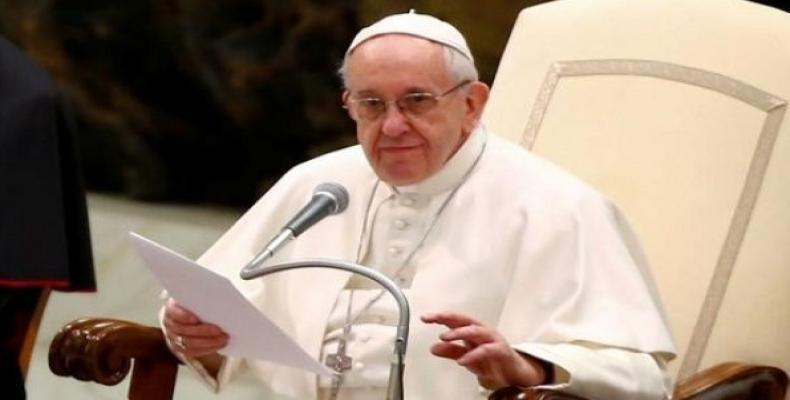 Rome, February 17 (RHC)-- Speaking at the Indigenous Peoples Forum in Rome, Francis said that economic interests need to be met with “the protection of the particular characteristics of Indigenous peoples and their territories.”

The head of the Catholic Church said the protection of Indigenous rights was “especially clear when planning economic activities which may interfere with Indigenous cultures and their ancestral relationship to the earth.”

Pope Francis cited Article 32 of the 1997, UN Declaration on the Rights of Indigenous Peoples, saying that “in this regard, the right to prior and informed consent should always prevail.”

While the Pope did not specifically mention the Dakota Pipeline, his speech comes after a U.S. federal judge denied a request by Native American tribes seeking to halt to construction of the final section of the 1,170-mile project, which activists say will destroy Indigenous sacred sites and damage the environment.

The U.S. Army Corps of Engineers last week granted a final easement to Energy Transfer Partners, the company building the US$3.8-billion project after U.S. President Donald Trump issued an executive order to advance the pipeline days after he took office in January.

The Argentinean-born religious leader has previously spoken out against inaction on climate change and Trump’s proposed border wall with Mexico and has been a frequent defender of Indigenous rights since he became Pope in 2013.