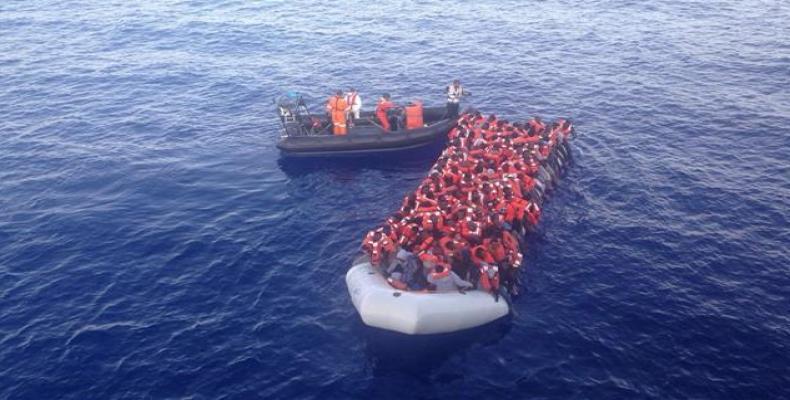 Geneva, November 19 (RHC)-- The latest figures show the death toll for refugees and asylum seekers attempting to cross the Mediterranean Sea in flimsy dinghies or unsafe fishing boats to reach Europe has soared to an unprecedented level.

The International Organization for Migration (IOM) announced that four shipwrecks in the Mediterranean over the past two-and-a-half days have left nearly 340 refugees dead or missing, making this year the deadliest for asylum seekers risking the dangerous voyage to Europe.

The IOM noted that the shipwreck causalities take to over 4,500 the number of refugees who have died or gone missing crossing the Mediterranean so far this year.  The figure marks a steady increase compared to the 3,770 people reported dead or missing last year.

The Geneva-based inter-governmental organization further warned against the rising number of deaths from Mediterranean Sea shipwrecks amid reports that human traffickers are forcing departures regardless of rough and cold waters in winter.

“What is shocking is the cruelty. The traffickers are forcing people to depart despite the prohibitive sea conditions.  When they get to the beach, migrants who don't want to go are forced to get on board, even with violence,” IMO Italy spokesman Flavio Di Giacomo said.

He added that smugglers do not mind if the refugees lose their lives.  “Once you pay, you can't go back,” Di Giacomo commented.  The remarks come as Doctors Without Borders says it has rescued 27 asylum seekers and recovered seven bodies after a rubber dinghy with more than 130 people on board sank in the Mediterranean Sea.

Separately, some 135 people died when their boat capsized off Libya's shores.  Only 15 survivors were rescued by a mercantile ship.  Another ship rescued 23 refugees, who said more than 120 people had been on board when their boat sank late on Tuesday.

Over the past few years, the European Union has been grappling with an unprecedented influx of refugees fleeing conflict-ridden zones in North Africa and the Middle East, particularly Syria.

A number of European countries have adopted harsh measures, including toughening border controls, shutting refugees out, and even erecting razor-wire fences, in response to the refugee crisis. Many pundits blame Western policies towards the ongoing conflicts for the predicament.