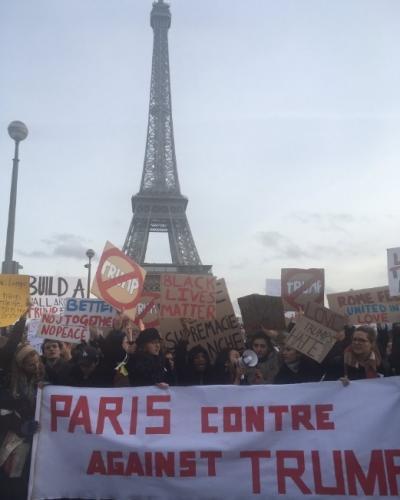 Paris, November 21 (RHC)-- Hundreds of people took to the streets of central Paris over the weekend to protest the “anti-immigrant speech” of U.S. President-elect Donald Trump.

The protest took place as many French people see the Brexit and Trump's victory as warning signs that fascist Marine Le Pen could win the country'snext presidential election in May.  Under the hashtag #ParisAgainstTrump, organizers called on residents and U.S. expats in France to take part in the demonstration, with similar ones propping up in several cities around the globe.

Demonstrators met at the Ecole Militaire at Champ de Mars park and then set off towards the L'Esplanade Trocadero, a few meters from the emblematic Eiffel tower.  Protesters carried banners that read "Build a wall around Trump and make him pay for it," "Trump hates," among other messages against the real estate mogul who will assume the U.S. presidency on January 20th.

Tens of thousands of people have also joined on social media standing up against Trump’s discourse of hate and xenophobia, and the dangerous policies he plans to enact.

Ultra Conservative populists leaders in the Netherlands, Germany, Denmark, Austria, Hungary and Slovakia were the first to congratulate Trump, including Le Pen who chairs the anti-immigration and anti EU National Front party.