Key Aide to Brazilian President Resigns as Scandal Closes In 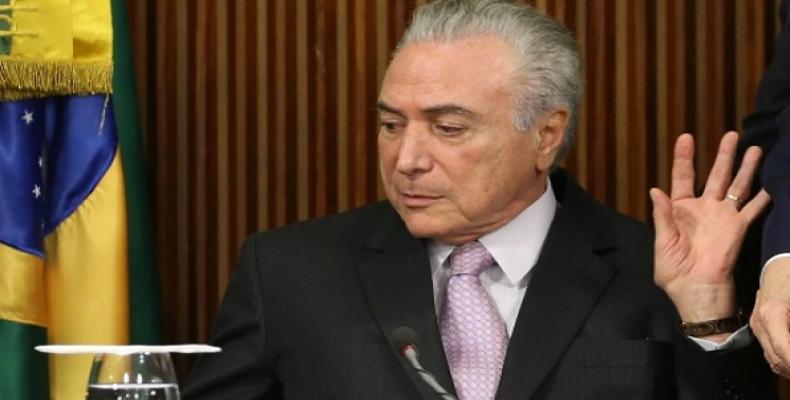 Brasilia, December 16 (RHC)-- A key aide and lifelong friend to embattled Brazilian President Michel Temer has resigned in the wake of testimony that he had accepted a $1.2 million dollar bribe on behalf of Temer.

Jose Yunes, who was Temer's lawyer before being appointed as a "special advisor" to the president after the parliamentary coup which brought Temer to power in July, was reportedly named during plea bargained testimony of a former executive of the Brazilian construction giant Odebrecht, the company at the heart of a major scandal.

The resignation of one of Temer's closest confidants comes in the wake of allegations last week that the President himself received almost $3 million in illegal campaign contributions.  While he denies the allegation, Yunes said he was resigning to "preserve his dignity" and in the hopes that his resignation will help Temer pursue his austerity agenda.

That agenda hit a milestone on Tuesday as Brazil’s parliament passed a vicious 20-year ban on any social spending, a decision which the U.N. Special Rapporteur on extreme poverty and human rights called an "historic mistake."  Thousands of Brazilians have protested the measure, with dozens arrested, as Temer's popularity has hit all-time lows, with only 10 percent approving of his plans to end social spending and cut state pensions.  Almost 65 percent of Brazilians want Temer to resign immediately.

Yunes' resignation comes as speculation increases that Minister of Civil Infrastructure Wellington Moreira Franco has also submitted a resignation letter after he was named in the Odebrecht plea bargain.  Franco’s resignation could be a significant blow to Temer's plans to privatize most of Brazil’s public infrastructure.

In July and August, Temer led a parliamentary coup against democratically-elected President Dilma Rousseff, whom he and others accused of corruption despite Rousseff having been cleared of all charges by an independent investigator.  Soon after her impeachment, several coup leaders were recorded admitting that the move against Rousseff was an attempt to end the investigation into political corruption.