Brazilian Court to Begin Trial that Could Unseat President Temer 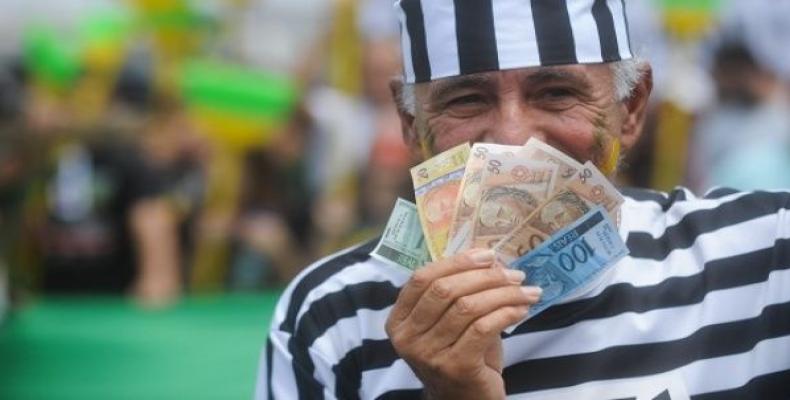 Brasilia, May 18 (RHC)-- Brazil’s top electoral court has announced it will restart the trial on a case that could annul the 2014 presidential election on charges of illegal campaign financing and even oust President Michel Temer one year after he was installed in office through a parliamentary coup against his predecessor Dilma Rousseff.

Justice Gilmar Mendes, president of the Supreme Electoral Court, known by its Portuguese acronym TSE, announced the trial is expected to start in June after it was suspended at the beginning of April for the defense to prepare new testimony and arguments.

Prosecutors allege that Rousseff's Workers' Party, known as the PT, received millions in illegal campaign donations as part of a wider corruption scheme that involved billions in bribes paid by large construction firms in return for winning lucrative contracts from state-run oil company, Petrobras.  The case also probes questionable contributions to Temer's campaign when he was Rousseff's running mate in her successful 2014 bid for re-election.

Temer's right-wing PMDB party was formerly in a coalition with Rousseff's PT before a rupture last year that helped pave the way for the controversial and ill-footed impeachment process, widely condemned as a parliamentary coup.  Temer, then Rousseff's vice president, became a key backer in ousting the president, aligning more closely in the process with the conservative PSDB, which lost the 2014 election to Rousseff and is ironically behind the complaints filed with the TSE that could unseat the unelected president.

Marcelo Odebrecht — once head of one of Brazil’s largest construction company, Odebrecht, which has been at the center of the country's massive corruption scandal — had told prosecutors that they contributed much more to Rousseff's campaign than the law allows.  Odebrecht also said Rousseff knew about the contributions in his testimony.

Rousseff denied any relationship with the company and said she had never authorized the use of unreported and undeclared financial resources during her electoral campaign.  Although Rousseff's rivals have often portrayed her impeachment as part of a campaign to root out government corruption, she was removed from office on accusations that she cooked the books with common accounting tricks ahead of her re-election campaign and was never accused of personal enrichment.

If the court rules that the Rousseff-Temer 2014 re-election campaign won due to the use of illegal funds, the race would be annulled and Temer would have to step down.  In that case, House Speaker Rodrigo Maia of the right-wing DEM party would become Brazil’s interim president for three months and Brazil would hold new, indirect elections for a term ending in December 2018.

In a March interview with Reuters, Judge Mendes — who is strongly linked to a party that is allied with Temer's — said that the president would not necessarily lose power if the election were annulled because he was not the head of the ticket.

Now it’s up to Mendes to set a date for the start of the trial, which will be heard by seven judges.  It could take up to a year before a verdict is reached, and it is expected that Temer's defense will attempt to stall the trial as much as possible in attempts of postponing the conclusion until the 2018 presidential election to avoid being booted from office early.