Thousands March in U.S. Cities in Solidarity with Migrants 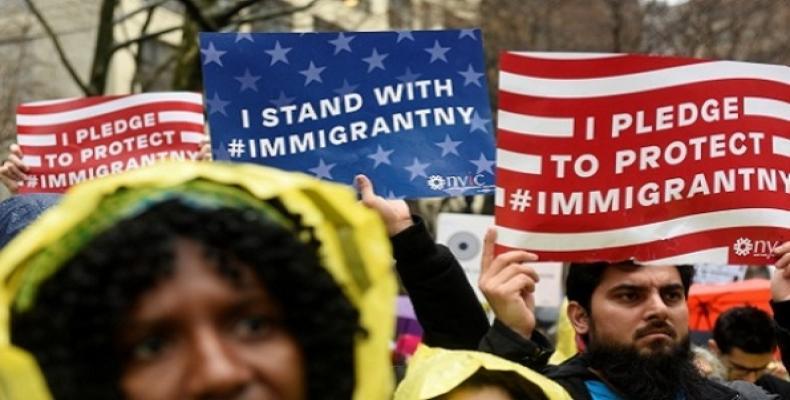 Washington, December 19 (RHC)-- Thousands staged protests in cities across the United States on Sunday to express their solidarity with migrants.  The demonstrations came on the occasion of International Migrants Day.

In Washington, D.C., New York, Los Angeles and Denver, protesters reflecting various nationalities and social movements rallied in support of the large immigrant population in the country that Donald Trump has attacked and denigrated.  In an interview with 60 Minutes last month, Trump pledged to deport approximately 2 to 3 million undocumented immigrants after taking office on January 20th.

Demonstrators, who included influential anti-Trump activists such as filmmaker Michael Moore, called for acts of civil disobedience to put a stop to Trump’s unrelenting hate and bigotry.  Speaking with MSNBC, Moore said the answer was more “protesting, obstructing, disrupting.”

Moore’s comments echo what other prominent figures have said, such as Virginia Senator Bernie Sanders, who has called for and organized and well-strategized massive mobilizations against Trump.  In Seattle, renowned socialist councilmember Kshama Sawant was also recently arrested at an anti-Trump rally for inviting people to create a "wall of mass resistance" in order to block Trump's cancerous rhetoric, specifically by staging protests during his inauguration.

"We must bring together millions of progressive workers and young people to build a wall of mass resistance against Trump,” Sawant wrote in CounterPunch in November.  “And to defend immigrants, women, Muslims, LGBTQ people and all others targeted by his presidency.”

The decision to elect a president does not ultimately belong to the people via the popular vote.  According to the U.S. Constitution, voters elect members of the Electoral College, who then elect the president.  A majority of 270 votes are required to be elected.

This means that despite losing to Democratic nominee Hillary Clinton by over 3 million ballots in the popular vote on the Nov. 8 election, Trump still won the state-by-state contest for the Electoral College.

The New York Immigration Coalition organized a rally that saw hundreds of people, including elected officials, march towards Trump Tower to let him and the Electoral College know they continue to oppose his looming presidency.