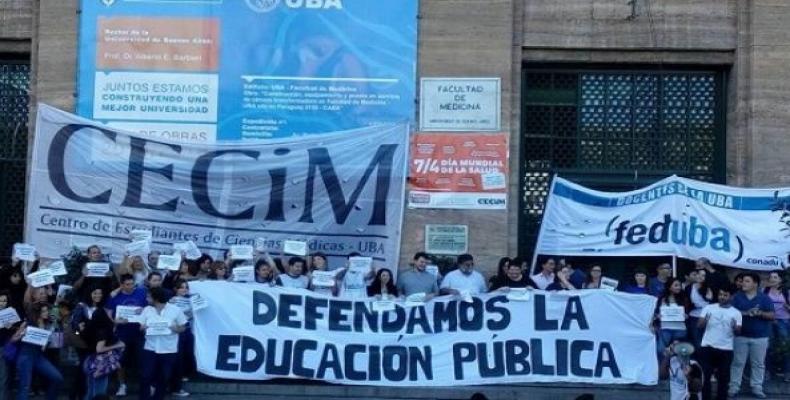 Buenos Aires, May 9 (RHC)-- Public universities in Argentina have launched the largest university strike in the last 12 years to demand that President Mauricio Macri set aside a higher budget for education as the government continued to prioritize an austerity agenda.

The main demand behind the strike is a higher budget for science and technology and a wage increase of 35 percent for teachers.  Since early March, thousands of Argentinian teachers in Buenos Aires and other cities have protested cuts to education under Macri's government.

"In the context of a conflict that has been going on for almost two months without any response from the national government, and in view of the attacks and smearing against teachers, the right to peacefully strike and the lack of budget for the public university and science and technology, the plenary resolved to deepen the claims with a National Plan of Struggle," said a statement from the University of Buenos Aires teachers' union, Feduba.

The students from the University of Buenos Aires and teachers of the Feduba union have announced that the strike will run until Friday, May 12th, and supporters will also take part in a large march with other universities next Tuesday, the 16th.

The march is set to show support for members of the Union of Education Workers and the Teachers' Union of Buenos Aires, who led nationwide teachers' strikes against the government in response to salary decreases and school closures since early 2017.

The teachers have asked for a 35 percent wage increase to compensate for the high inflation rate, which in 2016 reached more than 40 percent in the country.

University students will organize public classes and workshops throughout the week in different parts of the country as part of the activities related to the strike.

The teachers have also called on supporters to participate in a march, organized by human rights organizations on May 18 at the city's Plaza de Mayo, against a recent court ruling to reduce sentences in cases of crimes against humanity during the country's military dictatorship, setting a dangerous precedent that could see hundreds of dictatorship-era agents benefit from reduced jail times.

Since taking office in 2015, Macri has implemented austerity programs across numerous sectors of the country, including education, human rights programs and the provision of basic services, among others, while increasing the state's budget for military acquisition.