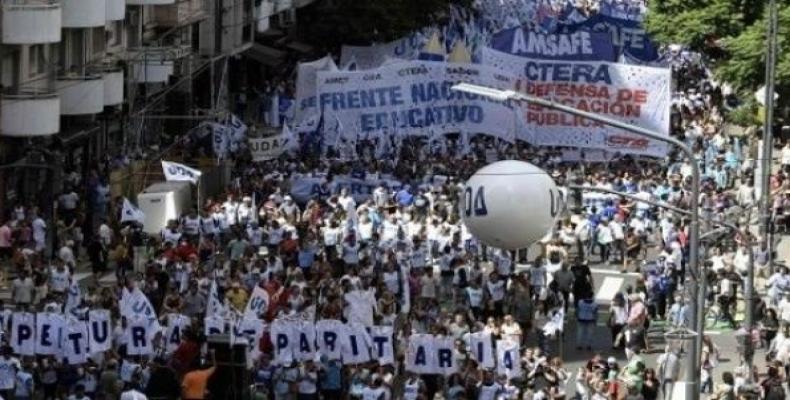 Buenos Aires, August 1 (RHC)-- Argentinean teachers have called for a new strike to demand a pay raise as students prepare to return for the first day of classes.

The Teachers Association of the City of Buenos Aires, known as Ademy, called a mass demonstration at the headquarters of the Ministry of Education.  Ademy’s General Secretary Jorge Adaro announced the strike is in response to the “government's miserable salary proposal and against the precarious attempt to transfer the language area.”

"What they are looking for is to make our jobs more precarious, to destroy our statute and to fragment the educative system, we are not going to allow it," he said.

Teachers have been fighting for a pay hike since January of this year.  In June, they were given hope after the government offered a 21 percent increase in two installments, with a trigger clause, along with other smaller bonuses.

Adaro stated that after four months of waiting for a response from officials, the offer was “insufficient and insulting, not 2 percent more than they proposed in March.”  He argued that accepting the new proposal would place Argentinean  teachers below “the poverty line.”

Since early January, teachers, families, lawyers, doctors and worker unions have taken to the streets in mass protests to demand the government of President Mauricio Macri address the rising levels of poverty and unemployment.

Since taking office in 2015, Macri has implemented austerity programs across numerous sectors of the country, including education, human rights programs and the provision of basic services, while increasing the state's budget for military acquisition.