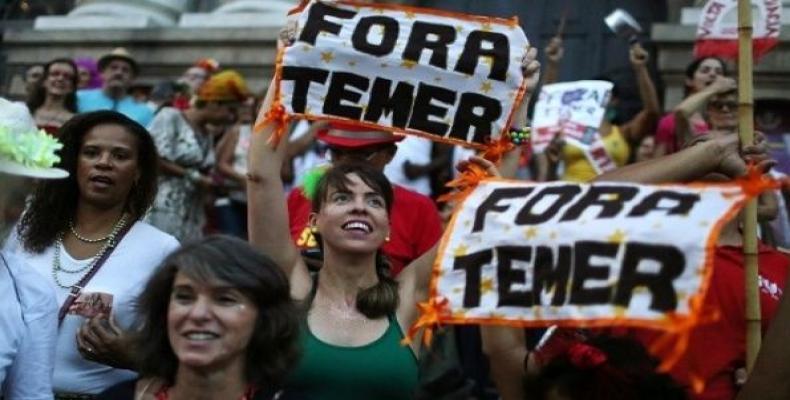 Brasilia, February 28 (RHC)-- Thousands of Brazilians have seized the country's Carnival festivities as an opportunity to protest against unelected President Michel Temer and in defense of the deposed President Dilma Rousseff as part of massive parties and parades in several cities.

During the celebrations in the city Salvador, the famous BaianaSystem band shouted with thousands of people "Fora Temer," meaning "Out with Temer," and "Coup-perpetrators shall not pass!"

The lead singer of the band, Russo Passapusso, brought the political debate to one of the world's most famous parties.  He shouted along with thousands of Brazilians, "Sexist, fascist, they shall not pass!"

Musician Caetano Veloso, known for his work in the "Tropicalismo" musical movement and as a political activist, also showed his discontent with the current government, shouting "Fora Temer" to a cheering crowd during his unexpected performance in Salvador.    "Salvador, Bahia: It's Carnival, but none of them have not forgotten about the coup in Brazil."

Demonstrators also called for the country's constitutional president, Dilma Rousseff, to be reinstated in power with signs saying "Volta Dilma," meaning "Dilma Return."  Rousseff, who won re-election for a second term in 2014 with more than 54 million votes, was removed from office last August in an impeachment process widely condemned nationally and internationally as a parliamentary coup, but she was not stripped of her political rights, allowing her to run for office again in the future.

Michel Temer, on the other hand, who was Rousseff's running mate for the 2014 presidential election and played a role in orchestrating the parliamentary coup that removed her from office, is barred from running for office for the next two presidential terms for violating electoral finance rules — a fact that did not stop him from being installed as president.

Temer has introduced a series of sweeping privatization proposals and cuts to education, health and other social sectors since he was sworn in last August.  The unelected president, who has very low approval ratings in Brazil, is set to complete Rousseff’s presidential term until the next scheduled election in late 2018.