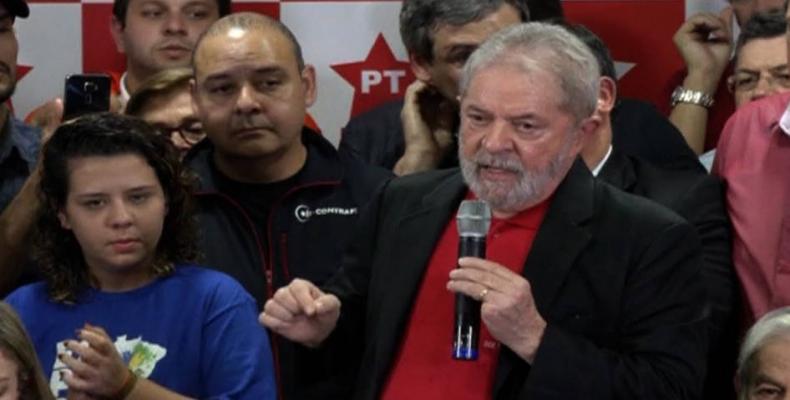 Brasilia, August 10 (RHC)-- Former Brazilian President and Workers Party founder Luiz Inacio Lula da Silva has sharply criticized the current president Michel Temer for pushing through harmful, unpopular reforms, vowing that the attacks against him would not make him “lower his head” and that the people would return to power.

“The solution to the problems in this country will only happen when it has a leader with legitimacy, and they know that we are capable and we will return. When I say that we will return, it is not me, it is you,” Lula said.  Referring to the right-wing interests that back Temer and his anti-worker austerity measures, Lula said during a meeting with Workers Party members that “they want Brazil to be a banana republic again.”

The unelected President Temer was just released of corruption charges by congress.  In spite of his dismal approval ratings, which hover around five percent, the right-wing president plans to continue to push through his agenda of austerity and cuts to workers rights and social programs, beginning with an unpopular pension reform.

“The expense that they (the government of Temer) want to cut is not theirs, but rather the people's,” he said.  He pointed out education cuts as an example, harshly criticizing the “ignorant” mentality that sees something liked education as an “expense” rather than an “investment.”

Lula was recently sentenced to over nine years in prison for alleged corruption, a move which might prevent him from participating in next year's presidential elections.  A poll earlier this week showed that he was by far the most popular potential candidate, with a comfortable 53 percent.

“If they want to try and avoid my candidacy, that's okay.  They cannot harm me, cannot harm over 200 million Brazilians,” Lula said.

Gleisi Hoffman, the current Workers Party national president, said that the recent attacks on Lula's person and history have actually had the opposite effect that they intended to, and have galvanized support for the party.