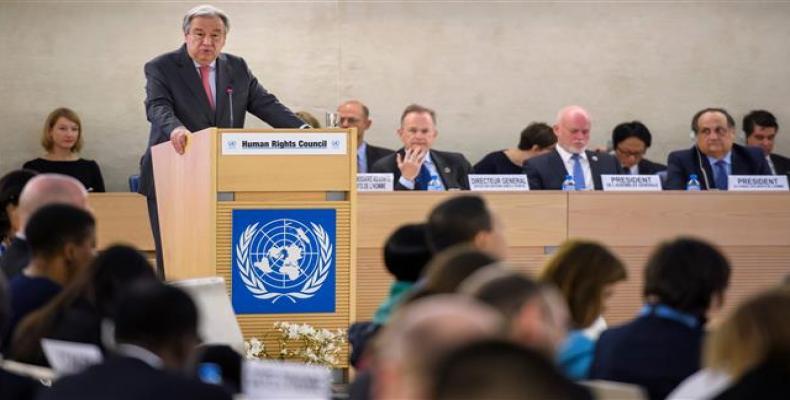 Geneva, March 2 (RHC)-- The United States says it is considering ending its participation in the UN Human Rights Council over what it calls the inter-governmental body’s "bias" and "obsession" with Israel.

In a speech before the Geneva-based UNHRC, U.S. envoy Erin Barclay said Washington "remains deeply troubled by the Council’s consistent unfair and unbalanced focus on…Israel."  Barclay said: "The obsession with Israel... is the largest threat to this council's credibility."  He added that Israel is “regularly subjected to unfair, unbalanced and unfounded bias."

Earlier this week, UNHRC spokesman Rolando Gomez told a press briefing that any country that wished to revoke its membership of the council would have to go through the General Assembly in New York.

U.S. President Donald Trump is considering withdrawing the United States from the UNHRC, which the new administration accuses of being biased against Israel, according to a report by POLITICO, citing informed sources.

Trump has vowed to improve U.S.-Israel ties that were often strained over illegal settlement activities during the administration of former President Barack Obama.  Israeli Prime Minister Benjamin Netanyahu traveled to Washington in mid-February for talks with Trump as an opportunity to improve ties.

Trump has also promised to move the U.S. Embassy in Israel to Jerusalem, a step that would enrage Palestinians and create an international furor.