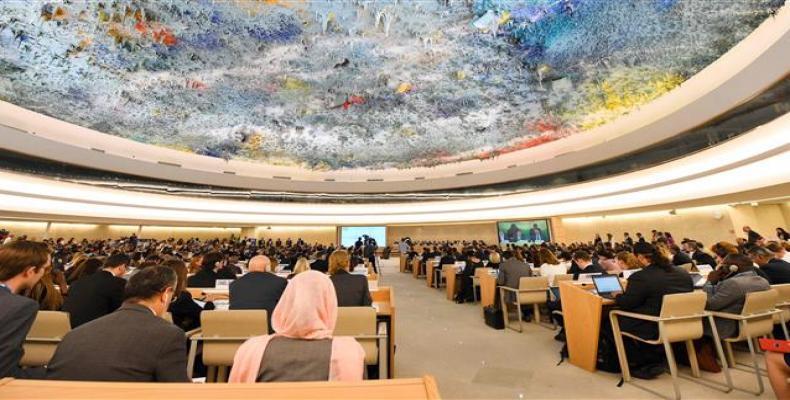 United Nations, June 21 (RHC)-- Diplomats from around the world defended the United Nations Human Rights Council after the United States withdrew from a body it branded an anti-Israel "cesspool."

Slovenian ambassador Vojislav Suc, who currently holds the council's rotating presidency and has been pushing a faltering reform drive, described the Geneva-based chamber as the best place to trigger action on dangerous rights crises.  "Let me say it very clearly, if human rights issues are not discussed here, in this very room, they have little chance to be dealt with meaningfully anywhere else," he told the council's 38th session, hours after Washington announced its pullout.

Suc further praised the 47-member council as the "only intergovernmental body responding to human rights issues and situations worldwide."  Once he receives formal notification of the U.S. withdrawal, Suc said he would arrange for the American seat to be removed and work with the General Assembly to elect a replacement member.

China, which has on many occasions voiced support for multilateral institutions abandoned by U.S. President Donald Trump, portrayed the council as "a major body... to promote the realization of human rights."  The Chinese ambassador to the UN in Geneva, Yu Jianhua, told reporters: "All delegations attach great importance to this body."  China currently sits on the council and rights groups have repeatedly criticized Beijing for seeking to stifle criticism of its own conduct.

The European Union assured that it "remains steadfastly and reliably committed to the Human Rights Council," and said it would continue to try to fix the body's problems despite the U.S. withdrawal.  Russia's foreign ministry had earlier accused Washington of "gross cynicism" and "disregard" for the United Nations.