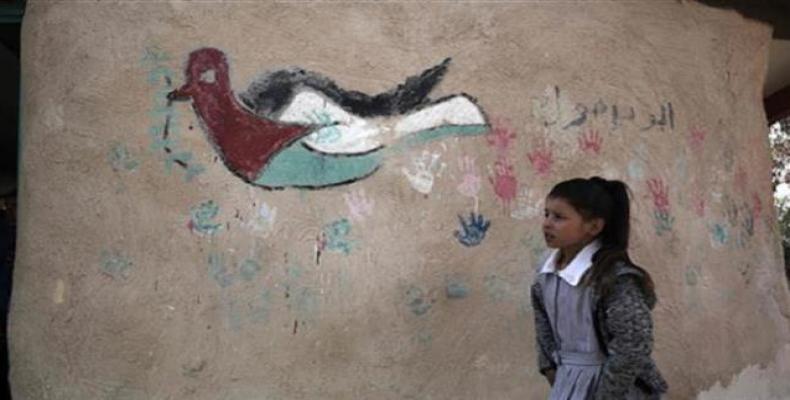 New York, May 2 (RHC)-- Human Rights Watch (HRW) has denounced the demolition of Palestinian schools by orders of Israeli authorities in the occupied West Bank, saying the move is part of a discriminatory planning system which amounts to a war crime.

“Israel has repeatedly denied Palestinians permits to build schools in the West Bank and demolished schools built without permits, making it more difficult or impossible for thousands of children to get an education,” the U.S.-based rights organization said in a detailed statement.  It added that at least 44 Palestinian schools were at the risk of being fully or partially demolished as the Israeli authorities said they had been built “illegally.”

HRW also said Israeli military authorities, since 2010, had razed or seized Palestinian school buildings or property in the occupied territory at least 16 times, 12 of which occurred since 2016, adding that they had repeatedly targeted some schools.

“Israeli authorities have been getting away for years with demolishing primary schools and preschools in Palestinian communities,” said Bill Van Esveld, senior children’s rights researcher at HRW, adding: “The Israeli military’s refusal to issue building permits and then knocking down schools without permits is discriminatory and violates children’s right to education.”

The statement further said that the demolitions were consistent with other measures the Tel Aviv regime had adopted to make “communities unviable,” including home demolitions and refusal to zone communities or give them access to utilities like water and electricity.

The European Union has also condemned Israel for the demolition of several Palestinian schools in the occupied West Bank.

The so-called Area C, which constitutes about 61 percent of the entire West Bank, is directly controlled by the Coordinator of Government Activities in the Territories (COGAT).  COGAT is a unit in the Israeli military that engages in coordinating civilian issues between the Israeli regime, the Israeli military, international organizations, diplomats and the Palestinian Authority.

The COGAT demands permits for new building projects, but the majority of planning requests are firmly rejected, leaving international donors and Palestinians alike with no choice but to construct new buildings anyway.

“Israeli officials should be on notice that razing dozens of Palestinian schools not only can block children from getting an education, but may be an international crime,” Van Esveld further said, adding, “As part of their efforts to support Palestinian schools, other countries should demand that those destroying schools should be held to account.”

According to the Fourth Geneva Convention and the Rome Statute of the International Criminal Court, widespread and unlawful destruction of property is prohibited and regarded as a war crime.

Israel has demolished three Palestinian schools in two weeks, leaving desperate students under the searing heat of the August sun.  In August last year, Israeli authorities destroyed or inflicted heavy damage on at least three educational facilities for Palestinian children in the Area C in the course of two weeks.

About 600,000 Israelis live in over 230 settlements built illegally since the 1967 occupation of the Palestinian territories.  The continued expansion of Israeli settlements is one of the major obstacles to the establishment of peace in the Middle East.

In recent months, Tel Aviv has stepped up its settlement construction activities in the occupied Palestinian lands in a blatant violation of international law and in defiance of United Nations Security Council Resolution 2334.  European nations and the UN, among others, maintain their strong opposition to settlement building in the Palestinian territories.