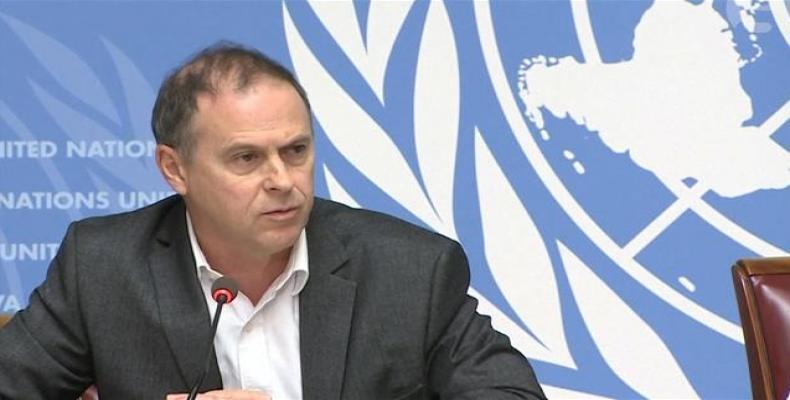 Geneva, May 16 (RHC)-- The United Nations human rights body has called for an independent investigation into the recent Israeli massacre of Palestinian protesters in Gaza Strip after the U.S. blocked the same bid at the Security Council.

“We call for independent, transparent investigations in all cases of death and injury since 30 March.  Since 30th March, 112 Palestinians, including 14 children, have lost their lives at the fence and thousands have been injured,” Rupert Colville, the spokesman for the Office of the High Commissioner for Human Rights, told reporters in Geneva on Tuesday.

“We stress, again, that lethal force may only be used as a measure of last – not first – resort, and only when there is an immediate threat to life or serious injury,” he noted.

“An attempt to approach or crossing or damaging the fence does not amount to a threat to life or serious injury and are not sufficient grounds for the use of live ammunition. This is also the case with regards to stones and molotov cocktails being thrown from a distance at well-protected security forces located behind defensive positions,” the UN official added.

Colville noted that six children and one health worker were among the fatalities and 10 journalists sustained injuries from gunshot wounds.  The UN rights official warned of the lack resources for treatment of the injured inside Gaza Strip due to destruction of healthcare infrastructure of the coastal enclave and noted that Israel is effectively preventing the wounded from exiting Gaza for treatment.