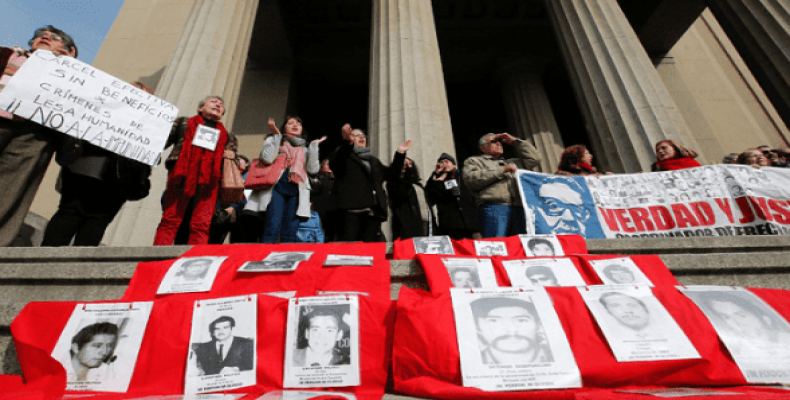 Santiago de Chile, October 12 (RHC)-- Chile’s Court of Appeals sentenced four former agents of Augusto Pinochet’s dictatorship to five years and one day in prison for the kidnapping and disappearance of student and left-wing activist Gabriela Arredondo in 1974.

The sentence was handed down by Judge Mario Carroza and was ratified unanimously, according to a judicial spokesperson.

Arredondo was a 32-year-old student from the University of Chile where she studied French and was part of the Revolutionary Left Movement (MIR).  She was arrested by state security forces on December 19, 1974, after being detained was taken to Villa Grimaldi, one of Chile’s infamous detention centers for torture.

According to Villa Grimaldi detainees who survived their time at the center, Arrendondo was taken there and tortured until December 24th, the last time she was seen alive.

Miguel Krassnoff Martchenko, Pedro Espinoza Bravo, Fernando Lauriaini Maturana, and Rolf Wenderoth Pozo, were part of the dictatorship’s National Intelligence Agency (Dirección de Inteligencia Nacional, or DINA), a secret intelligence agency established to destroy leftist parties and movements, and which was involved in the disappearance, torture, and murder of hundreds of Chileans.

They will have to serve an additional five years in prison.  All four are currently in prison serving sentences for several other human rights violations or crimes against humanity.  Former agents Krassnoff and Espinoza have collectively received sentences of up to 600 years in prison for the various crimes they've committed.

During Pinochet’s U.S.-backed dictatorship, over 3,200 Chileans were disappeared or murdered by the DINA and the National Information Center (Central Nacional de Informaciones, or CNI).  The remains of at least 1,192 Chileans, disappeared during Pinochet's rule, were never found.

Every Friday, the Group of Relatives of the Detained and Disappeared in Chile organize protests to demand information on the whereabouts of their loved ones and to demand the agents of Pinochet's dictatorship serve their prison sentences in "common prisons."