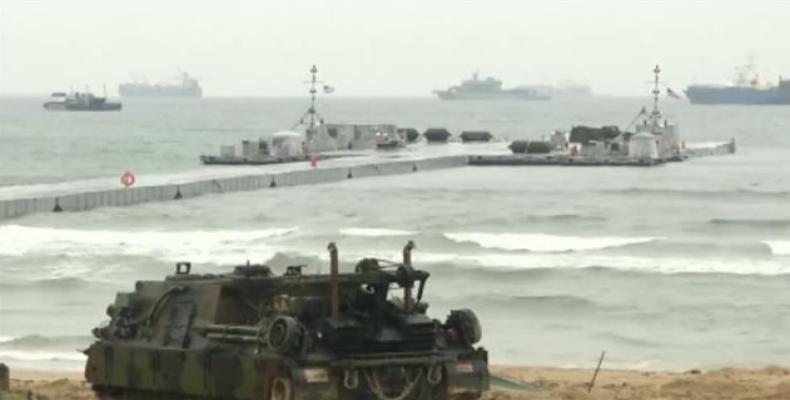 Washington, April 11 (RHC)-- U.S. and South Korean troops are holding a 10-day logistics drill in the city of Pohang amid growing tensions on the Korean Peninsula.

The joint drill, dubbed Operation Pacific Reach (OPR), involves about 2,500 U.S. soldiers and 1,200 South Korean soldiers, along with 50 vessels, and is due to last until April 21st.

U.S. and South Korean military officials said the joint drill is not part of the annual joint Foal Eagle exercise, and is aimed at enhancing logistics capabilities which can be applied not only for military purposes but also for humanitarian assistance.

A U.S. official told Reuters over the weekend that the drill began as the U.S. Navy strike group Carl Vinson cancelled a planned trip to Australia and was moving towards the western Pacific Ocean near the Korean peninsula as a show of force.

Pyongyang has slammed the move, saying the deployment proves the U.S. aggression against Pyongyang has entered a “serious phase.”

"We never beg for peace but we will take the toughest counteraction against the provocateurs in order to defend ourselves by powerful force of arms and keep to the road chosen by ourselves," a spokesman for the North Korean foreign ministry said.  North Korea said it was prepared to respond to any aggression by the United States.