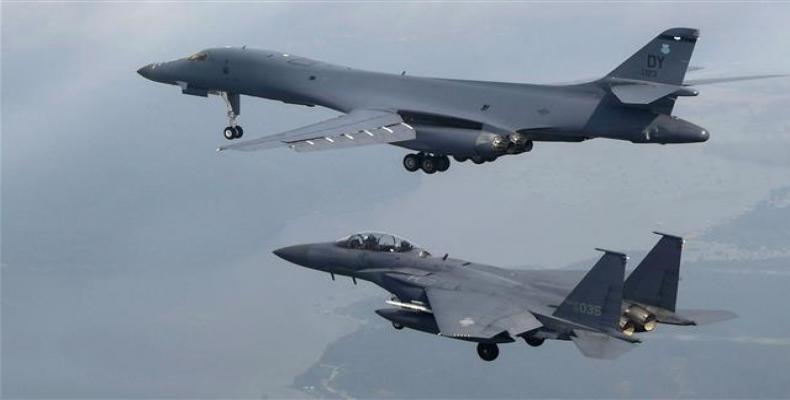 Pyongyang, July 31 (RHC)-- U.S. supersonic bombers flew over the Korean Peninsula along with fighters from Japan and South Korea, in a direct provocation against the Democratic People's Republic of Korea.  The U.S. Pacific Air Forces announced in a statement Sunday that the U.S. jets took off from an air base in Guam and were joined by Japanese and South Korean fighters.  It added that the 10-hour sequenced bilateral mission was a direct response to North Korea's test of an intercontinental ballistic missile (ICBM) on Friday and another one on July 4th.

Pyongyang says it has the ability to strike America’s mainland, a claim they say is proven by the Friday’s ICBM test.  “The successful ICBM test-fire is another great victory which dealt a heavy blow to the U.S. imperialists and its vassal forces keen on obliterating the DPRK’s [the Democratic People’s Republic of Korea] dignity and its right to existence,” Kim Yu Chol, a researcher of the State Academy of Sciences, told KCNA.

Pyongyang has also maintained that it would retaliate against any aggression by the US or its regional allies.  “If the United States sticks to its military adventurism against us and super-intensive sanctions schemes, we will respond with stern action of justice as we have already declared,” North Korea’s Foreign Ministry spokesman said in a statement on Sunday, KCNA reported.

China, meanwhile, has voiced concerns over the situation particularly with U.S. President Donald Trump in office.  “At the same time, China hopes all parties act with caution, to prevent tensions from continuing to escalate,” China’s Foreign Ministry said in a statement on Saturday.